As if Netflix did not already have enough major Oscar contenders in the running this unusual season — The Trial of the Chicago 7, Mank and Da 5 Bloods among them — along comes another: the first big screen adaptation of the late playwright August Wilson‘s 1982 Broadway play Ma Rainey’s Black Bottom — part of his ten-play “Pittsburgh Cycle” series — directed by multi Tony winner George C. Wolfe from a screenplay by Tony winner Ruben Santiago Hudson, and produced by Wilson super-fan Denzel Washington (who was Oscar-nominated for acting in and producing the 2016 movie version of Wilson’s Fences).Ma Rainey unfolds over the course of one afternoon in jazz-age Chicago, where the title character, also known as “the mother of blues,” has traveled with her younger female lover and her stuttering nephew to meet up with her four-piece band of black musicians and make a record for a white producer, facilitated by her white agent. Through grievances expressed by Rainey and each of her band members, but particularly her ambitious horn player Levee, one comes to understand the roadblocks for black artists of the time and how they could and could not be circumvented.While Santiago-Hu 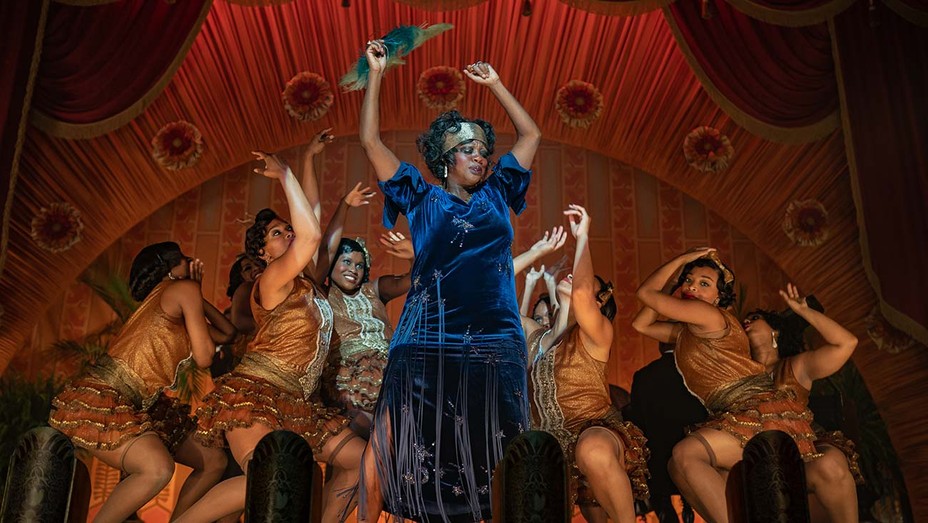 dson and Wolfe have “opened up” the play as much as possible for the screen, there is no escaping the fact that the film still feels theatrical. That’s not necessarily going to be an issue when it comes to the best picture race (Fences, which came out in a much more competitive awards season, felt even more theatrical, and still wound up with a top nom), and it might actually prove an asset for the prospects of the performers.Viola Davis — whose three Broadway appearances, each in different decades, all came in Wilson plays, and who won Tonys for 2001’s King Hedley II and the 2010 revival of Fences, as well as an Oscar for the film version — gives one of her most colorful performances as Rainey, sporting gold teeth, thick makeup, wardrobe padding, sweat and a no-fucks-given attitude. She doesn’t do her own singing in the film, save for one number, but I had to inquire to know for sure, which means the filmmakers did a good job. (She and Wolfe previously teamed up on the 2008 film Nights in Rodanthe.)

And Chadwick Boseman, who tragically succumbed to colon cancer in August while the film was in post-production (and to whom the film is dedicated), seems to relish playing feral Levee and delivers the best of the film’s numerous lengthy monologues (an electric one about his mother), although it must be said that each member of the band — the others played engagingly by Colman Domingo, Michael Potts and Glynn Turman — has his own moment to shine.

Both will be formidable contenders for lead acting honors throughout the season to come. (Some stats to note: Boseman, who is also in the running in the supporting category for Da 5 Bloods, could become only the eighth posthumous acting Oscar nominee, and would be only the third posthumous acting Oscar winner after Peter Finch for Network 44 years ago and Heath Ledger for The Dark Knight 12 years ago.)

As for the film itself? I anticipate that the two most common responses to Ma Rainey — not necessarily mutually exclusive — will be that (a) it is a bleak story centered on some pretty hard-to-warm-up-to characters, and (b) its script and performances do a great job of provoking thought about the way that artists of color have been treated in the past and present. Davis herself has said, “A huge motivating factor with me is feeling like I’m not valued,” which is why it was a treat for her to play a performer who knows her worth and won’t accept anything less than it for anyone.

Ma Rainey’s Black Bottom is set to have a limited theatrical release later this month before hitting Netflix on Dec. 18. A week later, on Christmas Day, the streamer’s competitor Amazon will release Regina King’s festival darling One Night in Miami, which is set 37 years later but touches upon some related subject matter (particularly in its Sam Cooke story arc). Will the SAG Awards nominating committee include both in the five-horse SAG ensemble category? And will the increasingly diverse Academy of Motion Picture Arts and Sciences include both in the five-to-ten-horse best picture Oscar category? Only time will tell.

For more on the original article visit: https://www.hollywoodreporter.com/race/awards-analysis-viola-davis-and-chadwick-boseman-enter-contention-for-ma-raineys-black-bottom