Two years ago during the Summer Olympics in Rio, African American Simone Manuel shocked the world by winning an Olympic gold medal for the U.S. in the 100-meter freestyle.

Not only did she shock the world, but she also surprised many African Americans who rarely see successful Black swimmers make it as far as the Olympic games. After winning, Manuel said that she hopes for a day when there are more Black swimmers. A local nonprofit and sorority are doing their part to make that dream a reality in the Jacksonville area.

Recently, members of the Gamma Omicron Sigma Chapter of Sigma Gamma Rho sorority teamed up with the Shawn D. Delifus Foundation to provide free swim lessons to the community.  According to national statistics, Black people in the United States drown at five times the rate of white people. Both organizations are working to promote water safety and teach more African American to swim.

In honor of the sorority’s 96th anniversary, members presented a check for $1,188 to the foundation, which in turn allowed for 22 swimmers to participate in weekly Saturday classes at the Winston Family YMCA in Riverside.

“We are proud to make this donation for the Shawn D. Delifus Foundation.  Research shows that formal swimming lessons reduce the likelihood of childhood drowning by 88 percent,” said Angela Spears, chapter president.

Sigma Gamma Rho has a national partnership with USA swimming. Their program, Swim 1922 aims to decrease the rate of drowning, especially in African-American communities.  The Shawn D. Delifus Foundation serves families through education, nutrition and the sport of swimming while elevating them. 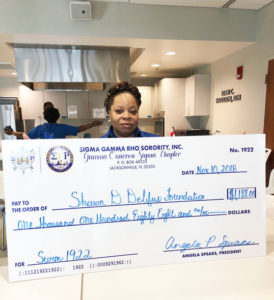