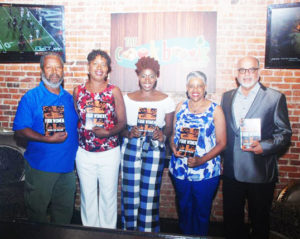 The People Reading for Inspiration, Discussion and Enjoyment (P.R.I.D.E.) Book club celebrated its’ 25th Anniversary at The Cook Book Restaurant in Springfield.  Local author Nikesha Elise Williams was the featured author who presented her debut novel, “Four Women.” The novel tells the story of four women from different backgrounds – a teacher, news anchor, personal trainer and doctor; who develop a relationship when a tragedy brings their worlds together.  The dilemma in the book is the question can justice be served when the suspect is also the victim?

The book also deal with other questions like can domestic violence produce an intergenerational cycle?  Why does the abuser believe the abuse is acceptable, justified and unlikely to be reported?   These women display their strengths and vulnerabilities.  However, despite their accomplishments, they question their place as African-American women.

According to several attendees, the anniversary was a wonderful and enlightening evening that included delicious food and desserts. Members learned how the authors’ perseverance enabled her to publish her first novel despite several rejections.

Ms. Williams has now published a sequel to her debut novel. Born and raised in Chicago, Nikesha attended Florida State University, where she obtained a B.S. in Communication.  She is an Emmy award winning news producer and author.  Four Women was awarded the 2018 Florida Authors and Publishers Association President’s Award in the Adult Contemporary / Literary Fiction category.

P.R.I.D.E. is Jacksonville’s oldest and largest book club for people of color.  Its members discuss books covering diverse themes and subject matter monthly.  Throughout their tenure, P.R.I.D.E.  has read and discussed 300 books.