Breaking news
By Ann Scott Tyson Staff writer – Washington State University defensive lineman Dallas Hobbs walks through a vast but largely deserted campus athletic complex in Pullman, a quiet college town surrounded by golden fields of freshly cut spring wheat, on his day off from the Cougars’ football practice.“Hey, coach!” he greets WSU head football coach Nick Rolovich in passing. Then he steps into the empty WSU stadium and strides onto the turf at center field, recalling the night three years ago his team defeated the University of Southern California (USC) Trojans in overtime, and elated fans rushed the field.“It was pretty exciting,” recalls Mr. Hobbs, then a freshman, even though that celebration cost his team “a big fine.” 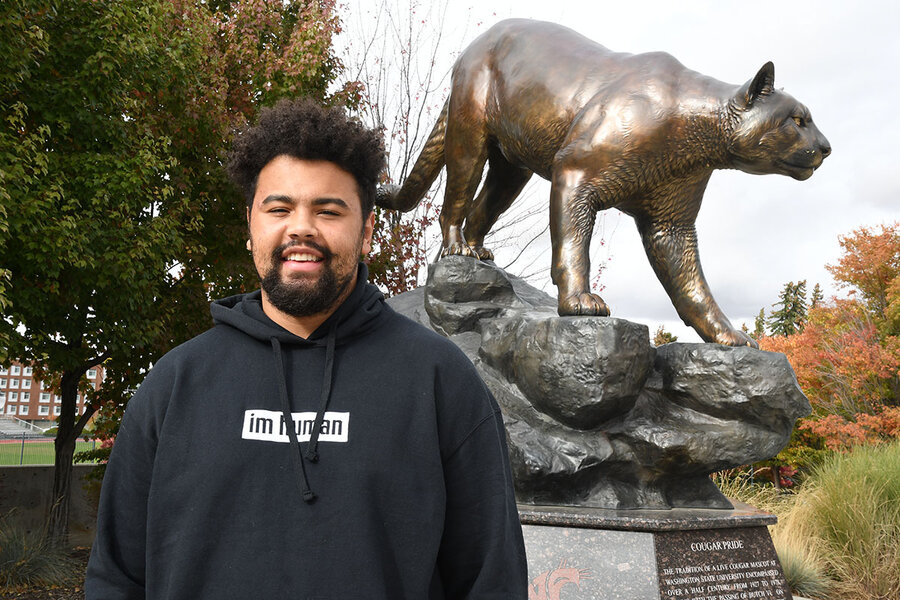 Back then, by his own account, Mr. Hobbs’ life revolved entirely around football and other sports – and still does to a degree. This year’s delayed Pac-12 Conference football season will kick off Nov. 7, and the 6-foot-6-inch, 285-pound junior says he’s raring to go.

But in sharp contrast to previous seasons, Mr. Hobbs has undergone a transformation in outlook that is shaping how he views football, school, and his future. For the first time in his life, he’s speaking out against racial injustice in sports, standing up for players’ health and well-being, and advocating for Black Lives Matter helmet stickers and uniform patches.

“It’s not something I ever truly thought I would be a part of, but … something needs to happen to create more success for college athletes who are putting their bodies and their health on the line,” says Mr. Hobbs.

The twin catalysts for his awakening as an activist-athlete were the pandemic, which starkly highlighted inadequate protections for college football players, the majority of whom at top levels are Black, and the killing in May of George Floyd, who was suffocated under the knee of a Minneapolis police officer.“The turning point was George Floyd,” says Mr. Hobbs, wearing a black hooded sweatshirt he designed that says “im human” on the front. “It has totally changed my perspective on a lot of things, and is really changing the path I am on now.”On college and university campuses across the United States, football players and other athletes are embracing a new activism aimed at raising awareness of racial inequities and proposing solutions – many of them feeling empowered to speak out for the first time, experts say.

“Student athletes have been inspired by the current movement for Black lives and racial justice, and it has been great to see more of them use their platforms,” says Shaun Harper, professor of education and business at USC and executive director of the USC Race and Equity Center. “Now is the time for Black student athletes to know how much power they have,” says Dr. Harper, an expert on racial issues in university athletics, “and to leverage that power … in the interest of Black students overall.” For Mr. Hobbs, the call to action was sparked by a text message in June from his friend Dylan Boles, a Stanford University football team defensive end. The two men are both natives of Iowa, where Mr. Hobbs grew up in Cedar Rapids watching his father, a veteran of Iowa University and NFL football, compete in rugby.

Courtesy of WSU Athletics
Dallas Hobbs (98), a defensive lineman for Washington State University, plays during a game against the University of Oregon in Eugene, Oregon, Oct. 29, 2019.

“I was always playing, no matter the season,” he says. “Most of my life has been in sports.” Family vacations often revolved around his sister’s basketball and volleyball tournaments. His mother also played sports, and is such an avid booster of Mr. Hobbs that when he enrolled at WSU she relocated nearby so she could attend all his home games.

The text from Mr. Boles lit up Mr. Hobbs’ phone at his Pullman apartment just as summer training was starting, but it wasn’t about football. It was about COVID-19. Soon, Mr. Hobbs found himself on regular Zoom calls with Mr. Boles and a growing contingent of Pac-12 football players, comparing notes on the uneven testing and safety precautions that threatened to put them at risk.

“There was this inconsistency, and nothing was truly enforced,” he says. “There were no safe standards to protect us.”The players created an informal Pac-12 unity group with the hashtag #WeAreUnited, and in August released a list of demands related to ensuring health and safety standards, assisted by allies such as Andrew Cooper, a former WSU cross-country runner working on his master’s thesis at the University of California, Berkeley, about racial injustice in college sports.

“It opened my eyes,” Mr. Hobbs recalls. “We put our bodies on the line every day, and we don’t know what the outcome is.”Meanwhile, the college athlete activism was spreading nationwide. A group of players from other conferences had launched a #WeWanttoPlay movement, and one of them, Trevor Lawrence, Clemson University’s national championship-winning quarterback, texted

Mr. Hobbs about their plan to save the college football season.In a Zoom call, the two groups decided to join forces. They asked Mr. Hobbs, an honor roll student, to create a graphic of their demands. A digital technology and culture major recognized last year for his 3.81 GPA by the College Sports Information Directors of America, Mr. Hobbs was well prepared for the task. The challenge? He only had 30 minutes to do it – racing to tweet it by midnight Aug. 9, before anticipated decisions by football conferences about the season.

Mr. Hobbs’ eye-catching graphic created a sensation the next day, publicizing key demands of athletes from the Power 5 football conferences: They wanted NCAA-wide policies to adopt common health and safety standards, allow players to opt out without losing eligibility, and give players a voice at the table through the establishment of a college football players association.
“It was a big moment,” says Mr. Hobbs, talking over a fruit smoothie and burrito outside a WSU cafe one recent fall afternoon.His new activism has not come without pushback and pressures. At one point in August, he thought he’d been dismissed from his team, although he says it was a misunderstanding and was quickly cleared up.Still, he’s forging ahead, excited to combine his digital arts skills with advocacy – both for the football players and in his role as creative director of the WSU Black Student-Athlete Association.Progress so far has been encouraging, he says.

Already, the NCAA met two of the player demands: requiring rigorous player COVID-19 testing and standard health protocols, and guaranteeing an additional year of eligibility. “We count that as a win,” he says.Yet Mr. Hobbs expects a long, tough fight for the weightier demands he’s advanced with other Pac-12 football players. These include requests for six years of health insurance postgraduation, and that the Pac-12 channel 2% of its revenue to aid low-income communities, and 50% to players to build “generational wealth.”

“We are grateful for what we do get,” he says, “but a lot of people come from backgrounds where their family is struggling to make ends meet – a lot of my teammates are on that spectrum,” he says.
Training hard, wrapping up a double major, and preparing for graduate school and a career as a creative director, Mr. Hobbs is undeniably busy – but there’s no turning back on his newfound activism, he says.
“A lot won’t be solved with this generation of athletes,” he says, “but if I can stand up and show we do have a lot of power, maybe down the road college athletes will have that voice to create change.”
For more on the original article visit: https://www.csmonitor.com/USA/Education/2020/1105/Racial-equity-and-the-pandemic-How-a-collegiate-football-player-is-tackling-both