Writer, filmmaker and actor Chad Hendricks held a red carpet movie premier event last Sunday for his new independent movie entitled: “Me & Mrs. Jones.” The story depicts a young man in search of a love that was his for only a moment.

Hendricks plays Jack, a man in love with a married woman named Diane (an ode to the song Jack and Diane by John Cougar Mellencamp). The film’s central theme is the main character is in search of a love that can never be his. Diane moves from Florida to Arizona and after five years, Jack still dreams of Diane’s touch, her love and ambition to blindly create a future together.

Along the way, the film depicts Jack wrestling with personal demons such as his relationship with his stepfather and his paranoia with his mother believing that she deceived him in the past. In real life, Hendricks has wrestled with similar issues and eventfully film-making became a means of expression and therapy.

At least one hundred of Hendricks’s family, friends and mentors showed up to review the new project at Cuba Libra event center on Beach Blvd. To date, Hendricks is the creator of nine feature films in the last 18 years. His third film, “Insane in the Brain”, a 70’s afro-comedy was inspired by his love for Rudy Ray Moore movies.

His career also boasts an Internet Movie Database (IMBD) page listing his time in Los Angeles as an extra on award winning films such as the Cohen’s Brother’s movie, “O, Brother, Where Art thou?’ featuring actor George Clooney.

Chad cried when introducing the film and was at peace with his family and his success. 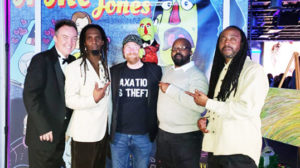