(Source BlackNews.com):  NATIONWIDE — A Look Into: Black Independent Filmmaking by Mann Robinson is a guide to succeeding in the world of filmmaking. If after watching a movie, you have ever wondered about creating a movie yourself, or have thought of bringing your imagination to reality via filmmaking, Mann Robinson is the person for you.

Having 15 years worth of hands-on experience in direction, production, and working with household names such as American actor Henry Lennix (Five Heartbeats, Ray), Brad James (His, Hers, and The Truth), and E.Roger Mitchell (Hunger Games, Walking Dead) to name a few; all of whom you can hear interviews with on Robinson’s own podcast on Spotify entitled Behind The Scenes with Mann Robinson, Mann has combined all his skills to bring out the best guide on filmmaking for the Black creative. His book, A Look Into: Black Independent Filmmaking, will help millions of aspiring filmmakers of color to fulfill their dream of creating a full-fledged movie.

With this book, Mann aims at revealing the deepest secrets of becoming a successful Black independent filmmaker. This book will not only focus on filmmaking but also on the key components of entrepreneurship and confidence. In his book, Mann has unraveled subjects that you won’t find on the internet or any other book; like whether African Americans have an advantage in the film industry, or if you should attend film school or not, and many such relevant topics. This book is truly in a class of its own, filling an unspoken void Black independent filmmaker. 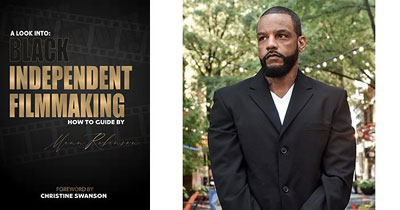 Mann was a rapper and entrepreneur until he delved into the world of filmmaking. He instantly fell in love with the art form, and ever since it’s been a wrap for anything else, he was officially bitten by the film bug. After co-directing a few dramas and TV series, he soon opened his own film production house, Metro Wealth Studios. Given his history and background, it wouldn’t be wrong to call Mann the right choice for guidance on filmmaking.

A Look Into: Black Independent Filmmaking helps readers to understand everything that comes under the entertainment realm. Through this book, you will find information and insights on independent filmmakers, resources, filming techniques, funding, and distribution, along with other subjects.

If you are talented and don’t shy away from working hard to achieve your dreams, this book will act as a force that will make you reach your desired goals. All you have to do it purchase this book and go through it thoroughly and the rest will be taken care of by Mann Robinson.

Pre-order your copy now on Amazon

For more on the original article visit: https://thewestsidegazette.com/film-director-mann-robinson-releases-the-1st-and-only-book-for-black-indie-filmmakers/