Northside Coalition members held a fish fry fundraiser over the weekend near the intersection of Moncrief and Soutel to raise funds and bring awareness to their fight to end the northside’s ills.

The Northside Coalition, under the leadership of former news anchor and now local activist Ben Frazier who is the group’s founder and advocate for change. Local citizens from around the urban core stopped at the location to purchase hot fish and make a donation. Throughout the day, the coalition was steadfast in spreading the word on the organization’s mission to teach, empower and encourage and engage the community in the areas of economic and health disparities in the urban core community. The organization was founded on the values of compassion, commitment, integrity and respect for the legacy of Jacksonville Black Community. Recently the coalition has been on the front line for justice to disrupt police officers shootings of unarmed black men, bodycams, profiling and overall police reform. Pictured l-r are members James Davis, Ron Neal, Maury Williams, Essey Howard, Alpha Gaines, Shevonica Howell, Tina Davis. Seated is Joe Ross and Ben Frazier. 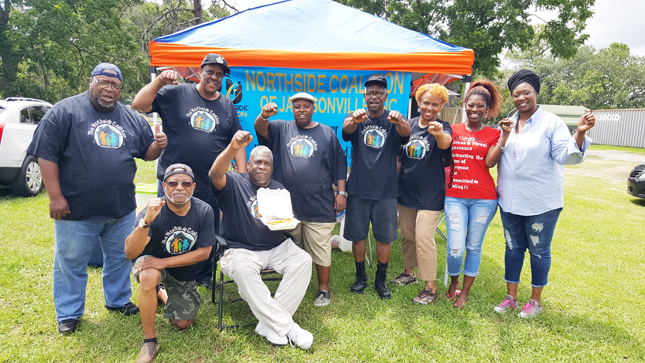