By Gracie Bonds Staples, The Atlanta Journal-Constitution – It’s not surprising “The Clark Sisters” biopic airing now on Lifetime is a big hit.

According to Nielsen, the two-hour movie garnered an impressive 2.7 million viewers when it premiered April 11, becoming the highest-rated original movie for Lifetime since 2016.

If there’s anything that has the power to move, to heal and lift the spirit, it’s gospel music. And few, if any, do that better than Jacky, Denise, Dorinda, Karen and Elbertina “Twinkie” Clark.

And lest we forget, the sisters’ late mother, Mattie Moss Clark, is credited with creating the three-part harmony — separating vocal parts into soprano, alto and tenor — a technique that is prevalent in gospel choirs today.

It’s little wonder then that watching their story unfold became for so many of us the highlight of an Easter Sunday weekend that lacked its usual traditions.

For those who missed it, the movie recounts the story of Mattie Clark and her five daughters as they created the iconic Clark Sisters sound that eventually earned them a spot in history books as the most celebrated and highest-selling female group in gospel history.

The movie will surely become a cult classic like the Temptations series, the Jackson 5 movie, and “The Five Heartbeats.”

But the sheer number of viewers brings to bear a couple of issues that shouldn’t be ignored, said Frederick Gooding Jr., an associate professor at Texas Christian University in Fort Worth, Texas.

One, despite continuing high returns, black viewers are still largely taken for granted.

“Very little content is geared specifically or primarily at black viewers on mainstream media platforms, but lo and behold, once companies do, it is usually with a high return,” Gooding said. “One wonders if Lifetime and other networks were to be more consistent with such productions, how all would stand to benefit with respect to viewers, sponsors and productions that employ more black talent as a result.”

Gooding remembered growing up listening to the Clark Sisters with his mother while on the way to church. Thus, watching the movie with his 16-year-old daughter along with the rest of the nation earlier this month was pretty special.

For me too, especially during moments when I got to peek into some of what went into making what remain some of my favorite gospel hits — “Is My Living in Vain,” “I’m Looking for a Miracle,” and “You Brought the Sunshine,” the 1982 hit that became an unexpected dance-club hit.

Each week, Gracie Bonds Staples will bring you a perspective on life in the Atlanta area. Life with Gracie runs online Tuesday, Thursday and alternating Fridays.
Photo: The Atlanta Journal-Constitution

Those were high moments, but like the dynamics of most any family, there were equal amounts of despair, discordant notes subtly suggesting that the only way mainstream America can access the black experience is through black people who sing and dance — even if it is gospel music.

Those moments may have soured an otherwise uplifting experience, said Gooding, author of the soon-to-be released “Black Oscars: From Mammy to Minny, What the Academy Awards Tell Us About African Americans.”

“The Clark Sisters,” he said, follows a time-honored pattern of movies such as the television miniseries “The Jacksons: An American Dream” and “The New Edition Story,” big-screen adaptations such as “Dreamgirls” and “The Five Heartbeats” and Academy Award-nominated biopics such as “What’s Love Got to Do With It” and “Ray.”

What makes that troublesome is these movies restrict the black experience to the stereotypical sports and entertainment arenas. And worse, perpetuate the stereotypical image of black men as angry and aggressive and in the case of Mattie Moss Clark, a strong black woman as a domineering and exacting matriarch, Gooding noted.

I found two scenes, in particular, hard to watch — when she is removed from the board of her Church of God in Christ congregation for singing at the Grammys with her daughters and later when Twinkie’s new and unemployed husband pushes her to the floor.

It’s important to note that entertainment has long been one of the primary ways for African Americans to express themselves and their genius.

“The Clark Sisters’ performances are indeed genius, but this isn’t the only cup into which they could pour into,” Gooding said. “If Mama Clark had put computers in front of them, perhaps they may have done coding. For all we know, the cure for cancer is somewhere in the ghetto. We won’t know about it because we are so focused on sports and entertainment.”

Let me hasten to say here that it isn’t just mainstream media who take a myopic view of blacks. You see the same thing happening with the NAACP Image Awards, which primarily highlight the contributions of entertainers and athletes.

To that, Gooding said the civil rights organization is simply being strategic.

“The easiest strategy is to go to where the attention is,” he said. “The system is so large and has been in the works so long it’s hard to break the pattern. It has been our work for so long, we’re viewed as largely an entertainment class.”

When audiences finally see inside the lives of these performers, they see plenty of drama replete with screaming, yelling, crying, and in the case of Aunjanue Ellis’ character as matriarch Mattie Moss Clark, groveling after being subjected to domestic abuse.

RELATED | If you want to cite stats about black people, let’s talk about history

I know what you’re thinking. The storyteller is just keeping it real, right?

That might be true, but in the end, Gooding said, it serves to only affirm negative narratives about the black family that have been firmly entrenched and rehashed in various forms ever since the 1965 release of the Moynihan Report, which blamed African American poverty on black mothers and alleged pathological black culture. 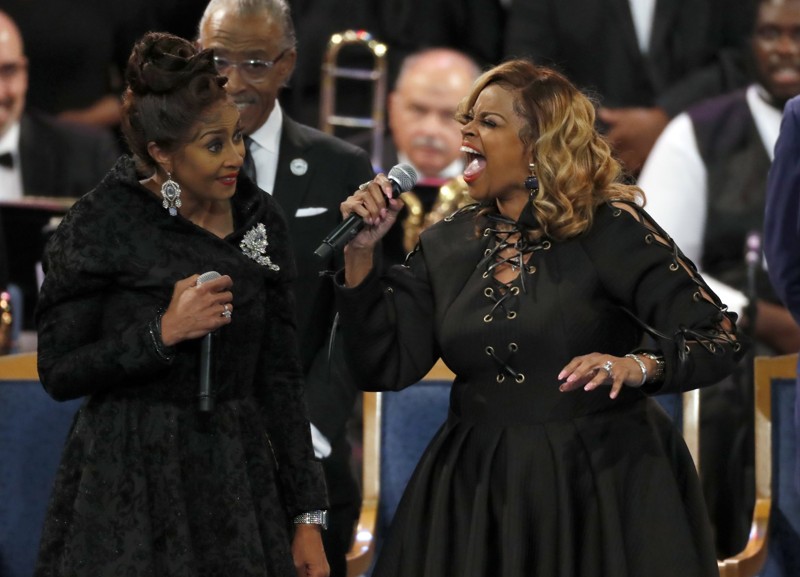 Dorinda Clark Cole (left) and Karen Clark Sheard, who are part of the Clark Sisters, perform during the funeral service for Aretha Franklin on Aug. 31, 2018, in Detroit. AP PHOTO / PAUL SANCYA
Photo: The Atlanta Journal-Constitution

To this point, I was left wondering why we didn’t get to see more of Karen’s and Dorinda’s husbands, who apparently were more devoted, hardworking men. As it were, the men in their lives seemed to only confirm the negative.

While “The Clark Sisters” movie may have missed the opportunity to show the positive, there are glimmers of hope elsewhere, Gooding said.

Directors Ava DuVernay and Ryan Coogler and writers Shonda Rhimes and Kenya Barris are among those addressing this dynamic head-on, but more is required to establish a proper balance so that negative images are no longer the norm.

Gooding said “The Clark Sisters” movie not only brought in the sunshine but also shone a light on attendant sociopolitical issues still lurking in the shadows — namely a lack of consistent high-quality images of blacks in general.

“I’d like to see so many more black people shine their light,” he said.

To view Lifetime’s “The Clark Sisters: First Ladies of Gospel,” you can go online to mylifetime.com.