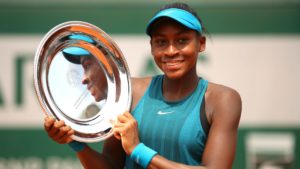 America’s Cori ‘Coco’ Gauff wrote her name into Wimbledon’s history books by becoming the youngest player to qualify for the main draw at SW19 at the age of just 15.

She didn’t stop there however.

She faced a daunting task of having to defeat five-time champion Venus Williams in front of a packed-out crowd on court one. Talk about pressure!

But the youngster didn’t seem to be phased by the occasion and who was on the other side of the net.

She remained calm and composed throughout and Venus simply didn’t have an answer for her young counterpart.

Gauff prevailed 6-4 6-4 and progressed the second round of her first-ever Wimbledon and became the youngest player since 1991 to win the first round of the ladies’ singles.

Background
Gauff grew up in Atlanta, Georgia and comes from an athletic background.

Her mother was a track and field athlete at Floria State University and Gauff’s father, who is her coach, played basketball at Georgia State University. The 15-year-old admired Venus Williams and credited her for the reason she wanted to pick up a racket.

She also has an affiliation with Venus’ younger sister Serena, whose coach Patrick Mouratoglou selected Gauff to be part of his training camp when she was 11.

She is home-schooled by her mother and is quite the character off the court, admitting she is rather ‘goofy’.

How far can she go at Wimbledon?
With absolutely nothing to lose and her confidence at an all-time high, the sky is the limit for Cori Gauff.

Despite lacking experience, she has the talent and competitive drive to do some serious damage at the All England Club this year. If top seeds continue to fall, as was the case when second seed Naomi Osaka was eliminated, the draw could open up in Gauff’s favour.

Her powerful serve and accurate stroke-play make her a threat on any surface but especially on the slick grass courts at Wimbledon.

One thing’s for sure though, we will be hearing her name for many years to come.

What has she said?
Speaking after the win over Williams, 15-year-old Gauff was overwhelmed by the experience of playing on court one against her idol, but still maintained her poise during the match.

She was very graceful at the net and thanked her idol for what she has done for the sport.

“She’s been an inspiration for many people. I was just really telling her thank you.”

With so much class to go with all that talent, Cori Gauff is set for a long and distinguished tennis career.

What is next?
Following her sensational victory against Venus, the teenager is expected to earn almost well over $1 million in 2019.

She has already secured a deal with Head, one of the most popular racket manufacturers in the world and New Balance managed to acquire her signature before Nike.

The biggest surprise is pasta company group Barilla have also signed her.

Perhaps the fact that they have the great Roger Federer on her books may have swayed her decision? Or may be she just really likes pasta? Who knows?

We do know that she intends to stay focused and accomplish her goal of wanting to be ‘the greatest’.