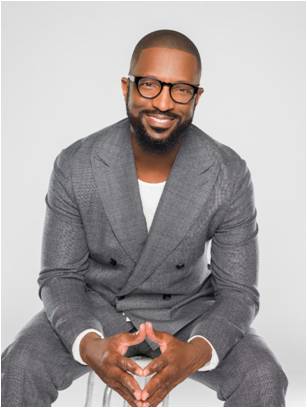 (DALLAS, TX) – June 28, 2019 – Today on The Tom Joyner Morning Show, Tom introduced listener favorite Rickey Smiley as the successor to the morning anchor position established by Tom over the course of 25 years. Joyner, who is retiring at the end of the year, acknowledged that Smiley has established himself as a trusted leader on-air and in the community with his current show, captivating audiences with his authentic humor but also his unique perspective on topics important to his audience. Smiley also announced that Eva Marcille and Gary Wit Da Tea would be among the on-air cast members joining him to broadcast out of the Dallas studios beginning January 2020. Additional details about the show will be shared in the coming months.
Joyner reflected on his accomplishments and the future, “I’m happy to see the landscape of Urban AC morning radio continue to expand with Rickey, and I’m proud of the doors the Tom Joyner Morning Show opened. Twenty-five years ago, there was no template for a syndicated Urban radio show and we worked hard to prove that we could successfully produce and market a national platform that would entertain, inform and empower African-American listeners. We broke some ground, raised the bar for what audiences expected from Black radio all while partying with a purpose. Yeah, we’ve done a lot but there’s still a lot left to be done. I’m confident that Rickey’s activism along with his love for radio, the community, and HBCUs, will pick up where we left off.”
Making the announcement public, Rickey Smiley shared his excitement, “It’s an honor to continue the legacy of my boss and frat brother Tom Joyner. Not only has he been a friend to my family and me over the years, but we consider him family. Tom’s mentorship has instilled in me valuable wisdom that I will carry with me through this new morning show.”
David Kantor, Reach Media and Radio One CEO, acknowledged the collaboration, “Tom changed the entire urban radio marketplace. He entertained and educated multiple generations of listeners over the last 25 years. While there is and will always be only one Tom Joyner, we are excited that Rickey will be moving to Urban AC in January. Like Tom, Rickey’s talent, community consciousness and commitment to his audience will serve his listeners well.”
Reach Media’s other current morning Urban AC program, The Russ Parr Morning Show, will also continue in syndication into 2020.
BACKGROUND: Rickey Smiley Morning Show Brand and Trajectory
The Rickey Smiley Morning Show has been recognized for its excellence in connecting with its listeners, and continues to grow with the belief that “Radio is community”. The industry took notice in 2017 awarding Rickey with the NAB Radio Marconi Award as the top national/syndicated talent. Rickey uses personality, humor, conviction and relevant information to deliver a high-energy morning show engaging his listening community in unexpected ways. His show has distinguished itself with its innovative mix of entertainment and an unfiltered view on contemporary black life and parenthood, focusing on family, community and mentorship.
Smiley uses his radio platform to express his belief that “we are responsible for each other”, including purchasing a car for a young man profiled on social media who persisted through a daily 3-hour bus commute to his high school for well over a year in order to graduate. Similarly, the discovery of a co-host’s history with domestic violence prompted Rickey to put a spotlight on the urgency of the issue along with the resources available to provide support to victims.
Having attended Alabama State University and participated in numerous HBCU tours, Smiley is an ardent supporter of education – especially Historically Black Colleges and Universities.
Rickey reinforces his radio brand 24/7 interacting online, socially with 5 million followers, through his stand-up comedy, reality-based TV shows, and publishing – all amplifying his voice!
Gary Wit Da Tea, well established as everyone’s favorite diva, dishes the hottest gossip on the world of entertainment and his colorful opinions on all topics. With over 22 years on radio, along with numerous TV and charitable initiatives, he’s someone whose thoughts listeners look forward to hearing.
Eva Marcille, while originally known as a high fashion model and television celebrity, contributes a relatable women’s point of view with her sharp wit and sometimes challenging position, bringing balance to the show. She shares her life with listeners from entrepreneurial pursuits to marriage and motherhood.
BACKGROUND: Tom Joyner’s Career and Influence
In his 25 years as a leader in the industry, Tom Joyner’s impact and influence have never wavered. His morning “Party with a Purpose” revolutionized radio when it became the first morning show with music in syndication. Known widely as “The Hardest Working Man in Radio,” Joyner has made a career of doing the extraordinary in order to serve his audience: flying round-trip between Dallas and Chicago five days a week for seven years hosting morning drive and afternoons in two different cities; raising money to support students attending Historically Black Colleges and Universities with The Tom Joyner Foundation; producing and hosting a celebration of black families and communities, the Allstate Tom Joyner Family Reunion; galvanizing his listeners to provide relief funds for survivors of natural disasters. The Tom Joyner Morning Show is heard as a guide to the future of communications in the African-American community, consistently promoting relevant issues and social causes that need attention and action.