The great civil right lawyer and Supreme Court Justice Thurgood Marshall was passionate about educating Blacks on the good and bad aspects of the justice system.  As counsel to the NAACP, he utilized the judiciary to champion equality for African Americans.

Fast-forward to today in America, and the Jacksonville Urban League is still trying to do their part.  The historic organization hosted its annual “Community-Wide Crime Prevention Day,” Friday, October 12th, at The Ritz Theatre.

According to event sponsors, the goal of the event was to empower citizens through crime prevention education and to promote an environment in which people act individually and collectively to prevent crime and build safer communities.

More than 200 community residents attended this year’s event.  Various informative sessions were held and led by local stakeholders from topics like gun and prison reform to individual accountability.  “The Choice Factor” was a topic centered on a candid conversation from Judge Brian Davis. The Judge discussed the importance of taking personal responsibility for choices and the consequences associated with making bad decisions and the effects of crime.

The phrase “Knowledge is power,” is widely used by many, but when it comes to legal matters, it is extremely relevant.  Another key session from the event was, “So You Think You Know the Law?” which was aimed at educating attendees on some of the well known and not so well known challenges that regular citizens can face with the legal system. 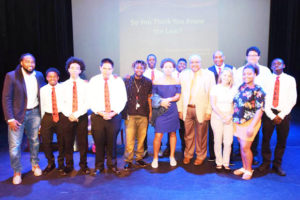