If you have watched any National Football League (NFL) games this year, you probably saw a unique logo on uniforms, team gear or even the football fields with the phrase “Crucial Catch.”

At first glance, you might assume that the words are directly related to the game itself, but it’s the name given to the partnership that has been established between the NFL and American Cancer Society (ACS).

For the 10th year, the NFL and the ACS are working together to support the fight against cancer through “Crucial Catch: Intercept Cancer.” The initiative, which kicked off during week one of the new season and continued through last week’s games, addresses early detection and risk reduction efforts for multiple cancers.

Locally, the J100 has been focused on fighting cancer through their “Men Tackling the Big C,” (MBTC) initiative that focuses on prostate cancer awareness.   The effort works to enlighten at-risk men on prostate cancer prevention, diagnosis and treatment. As part of MTBC, the J100 invited eight survivor families to the Crucial Catch event.

The NFL partnership also included Jags linebacker Donald Payne (#52), who worked closely with the organization and will represent the J100 MTBC during the NFL My Cause My Cleats campaign.

The J100 reminds its members, families and friends network that with early detection cancer is 100% treatable.  Visit this link to take the J100 MTBC Online Risk Assessment. 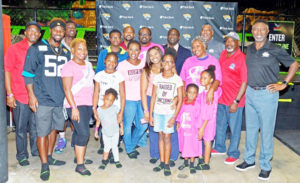