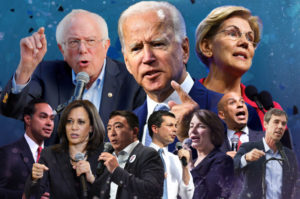 Weeks after the Tyler Perry Studios’ well anticipated opening, it’s now being reported that the studio will host the fifth Democratic presidential debate next month.

According to the Atlanta Journal-Constitution, the studio was hand-picked to be the venue on Nov. 20, when the Dem candidates will debate key policies and make their arguments for why they should be the pick to run against President Donald Trump in the 2020 election.

“Democratic Debate site is set: [Tyler Perry Studios] is a model for Georgia’s vibrant film industry, an engaged corporate citizen and an exceptional location for our #DemDebate. Looking forward to welcoming the candidates to Georgia on November 20.”

Tyler Perry Studios is the first large scale studio owned by an African-American. The sprawling backlot houses 12 soundstages  – each named after an African American trailblazer – as well as production facilities for Perry’s film and TV projects, and third party studios.

According to the Los Angeles Times, “the complex is larger than Paramount, Warner Bros. and Walt Disney’s Burbank studios combined.”