By Lynn Jones-Turpin – In 1926 historian Carter G. Woodson and the Association for the Study of Negro Life and History announced the second week of February to be “Negro History Week”.  This week was to be a celebration of all things African American in the United States.  In February of 1969, Negro History Week turned into a Black history month which was first celebrated on the campus of Kent State University. Since 1969, Black History Month has been celebrated with fanfare to educate and motivate Americans on the accomplishments of African American inventors, musicians, sports players and local city and state black history acknowledgments. 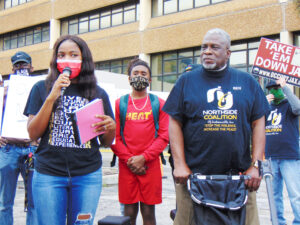 Recently, six Duval County Public school students held a press conference in front of the DSCPS Administrative building on the Southbank to highlight the recent Black history month controversy inside their schools. The students had issues with their principals for including “your lives matters” suicide prevention campaign with black history month.  The students felt disenfranchised and appalled that black history was put on the back burner.  Prior to the press conference, students held a peaceful protest inside their schools where students met in the halls and chanted, “Black lives matter,” to get the attention of the staff and to understand why Black History Month (BHM) was dismantled and being disregarded.  School Board member Darryl Willie stated, “The district launched a suicide prevention campaign with the #youmatter tag line because of increased suicides this school year. We have several initiatives in place to elevate black voices and history. The district has listened to the impact of the interaction and has halted the #youmatter campaign. Resources are still available for students seeking help,” said Willie. 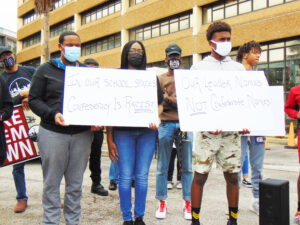 The rally was attended by local activist that stood with the students to show support and to hear students speak out on the controversy and injustices in the world. Having a platform to air their grievances was a coup for the students to have their voice heard.  The end results and next steps include community wide forums, in-school conversations and dialogue. According to Duval County Public School website, “Students are encouraged to continue the conversation at their schools with their school leaders on how we can continue to improve the work we do in Black History education.”  (Redburd Images photos)