By Travis Caldwell and Jill Martin – (CNN) – After rioters stormed the US Capitol on Wednesday to protest Joe Biden’s Electoral College victory, players and coaches across American sports leagues voiced their concerns about what they witnessed in Washington.

“This is what’s going on. It has been incited. People can’t be surprised at what’s happening, because it’s kind of been provoked for a long time,” Seattle Seahawks offensive lineman Duane Brown said.
“It’s here now, and it’s not being met with the same outrage and the same anger as other protests, and things that have happened over the last recent months. I’m praying for everyone involved, for safety, I believe they said some people were shot or injured so praying for the best outcome possible in those situations. But like I said, it’s been provoked for a while.” 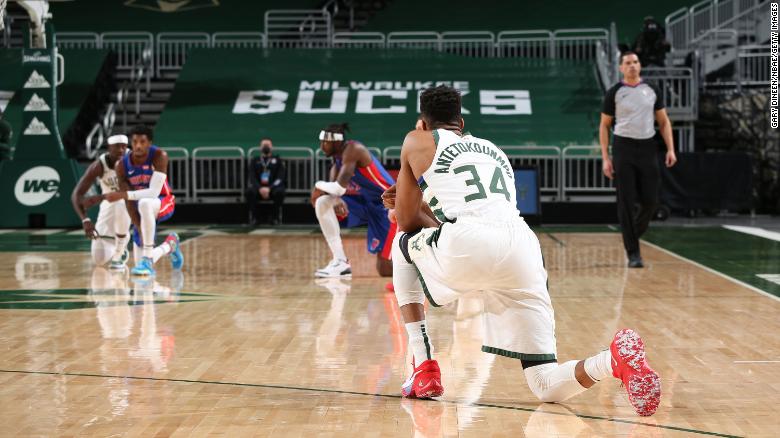 Players from the Bucks and Pistons kneel shortly after the start of an NBA game Wednesday.
NBA players also demonstrated before and during games nationwide to recognize Jacob Blake, including kneeling during the national anthem and after the opening tip. 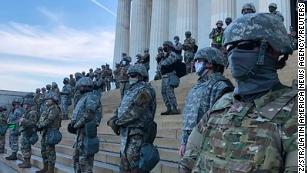 This was the police response when it was Black protesters on DC streets last year
Blake was shot seven times by a police officer in Kenosha, Wisconsin, last August. He survived the shooting but is paralyzed from the waist down. The Kenosha County district attorney announced Tuesday that the officer, Rusten Sheskey, will not face charges.
At the start of Wednesday’s game between the Boston Celtics and Miami Heat in Miami, the teams released a joint statement.
“2021 is a new year, but some things have not changed. We play tonight’s game with a heavy heart after yesterday’s decision in Kenosha, and knowing that protesters in our nation’s capital are treated differently by political leaders depending on what side of certain issues they are on. The drastic difference between the way protesters this past spring and summer were treated and the encouragement given to today’s protestors who acted illegally just shows how much more work we have to do.”
Players from the Celtics and Heat kneeled during the national anthem, as did the Golden State Warriors and Los Angeles Clippers before their game in San Francisco. Members of the Toronto Raptors and Phoenix Suns locked arms in a circle before their NBA game.
The Milwaukee Bucks and Detroit Pistons played their NBA game less than an hour away from Kenosha. After the opening tip, players on the court from both teams took a knee. Following the game, it was revealed the gesture was for Jacob Blake, and Bucks players, including star Giannis Antetokounmpo, said it lasted seven seconds for the seven gunshots Blake took. 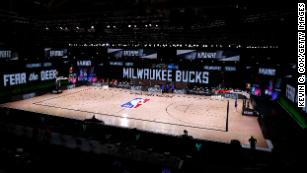 Athletes across US sports take a stand, as games are called off in solidarity with Bucks’ boycott
In August, following the shooting of Blake, the Bucks decided to boycott their playoff game. This led to other NBA playoff games being postponed for the day, and was followed by WNBA, MLS and MLB games being called off in an act of solidarity.
Boston Celtics guard Jaylen Brown spoke Wednesday to the dichotomy of situations faced by different parts of society.
“It reminds me of what Dr. Martin Luther King has said, that there is two split different Americas. In one America you get killed by sleeping in your car, selling cigarettes or playing in your back yard. In the other America, you get to storm the Capitol, and no tear gas, no massive arrests, none of that,” Brown said.
“I think it’s obvious, it’s 2021, and I don’t think anything has changed. We want to still acknowledge that, we want to still push for the change that we’re looking for, but as of yet we have not seen it. We want to keep conversations alive and do our part,” he added.
Celtics teammate Jayson Tatum said, “It was heavy on our hearts. We were thinking about it.”
“It’s tough because we’re not surprised about what we see on TV. It’s the world we live in. I just feel like the same energy should be kept as when we see our people peacefully protesting for things that we see our people getting murdered on TV and live and videos. They’re protesting in the Capitol — rioting in the Capitol for losing an election. It’s two different things. I want the same energy on TV to be, ‘They’re thugs and criminals,’ the same terms they used when they see our people protesting for losing our lives,” Tatum said.
Baltimore Ravens quarterback Robert Griffin III tweeted, “The difference in the treatment between races in America is on full display.”
Houston Texans wide receiver Randall Cobb wrote, “This is America… did they really just storm the Capitol in an attempted …coup!?”
Philadelphia 76ers head coach Doc Rivers said democracy would prevail at the end of the day, yet shared the sentiments expressed by those in the sports world.
“When you saw the protest in the summer and you saw the riots, or more the police and the national guard and the army, and then you see this and you saw nothing, it basically proves a point about a privileged life in a lot of ways,” Rivers said.
“I will say it because I don’t think a lot of people want to. Could you imagine today, if those were all Black people storming the Capitol, and what would have happened? That, to me, is a picture that’s worth a thousand words for all of us to see, and probably something for us to reckon with again.” 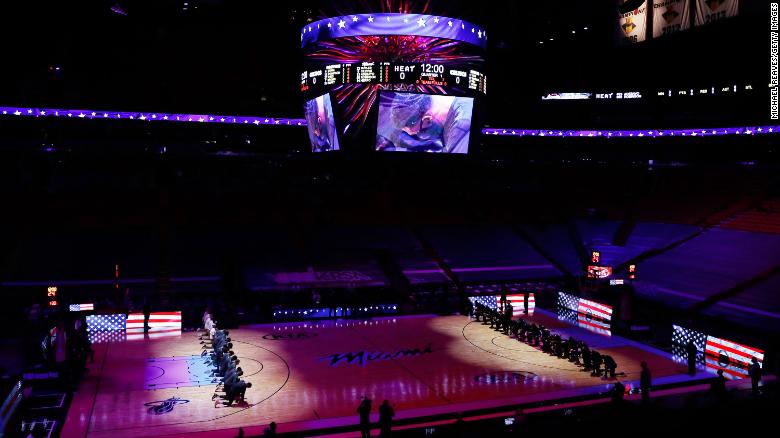 The Boston Celtics and Miami Heat kneel before an NBA game Wednesday.
Other NBA coaches made pointed comments at the political climate in Washington, in particular the fires stoked by President Donald Trump and Republican senators.
Warriors head coach Steve Kerr remarked, “I wish that people like Ted Cruz and Marco Rubio and Josh Hawley had to do pre-game media before they meet in Congress. It would be great for them to answer the question, ‘Are you happy now? Do you keep moving the line back? Does this change anything? Or are you going to continue to enable?'”
Celtics head coach Brad Stevens said before their game, “I think we all hope that the people we elect to lead us are supposed to be modeling leadership will do so in a way that is motivated by serving others, by showing compassion, by acting gracefully. And instead, we elected a President who luckily is on his way out and others that have not shown that kind of grace. It’s been consistent. And they just operated at a win-at-all costs attitude.
“In this situation, a disgraceful ending. I’m looking forward to two weeks from now, as I know a lot of other people are too.”

For more on the original article visit: https://edition.cnn.com/2021/01/07/sport/sports-reacts-dc-riot-spt-trnd/index.html