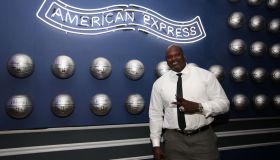 The COVID-19 pandemic has significantly impacted Black-owned businesses throughout the United States. A report released by the New York Fed revealed nearly half of small Black-owned businesses shuttered as a result of financial woes that stemmed from the public health crisis. Former NBA player Shaquille O’Neal is on a mission to reverse the alarming trend. According to Billboard, O’Neal recently teamed up with American Express for the creation of a program designed to support Black entrepreneurs.

The initiative—dubbed “Coalition to Back Black Businesses”—was launched to assist small Black-owned businesses in their COVID-19 recovery process. Through the $10 million effort, $5,000 grants will be distributed amongst business owners and a fraction of the funds will go towards a program centered on business mentoring and leadership development. Participating groups include Walker’s Legacy, the National Business League, the National Black Chamber of Commerce and the U.S. Black Chambers, Inc.

O’Neal says it is important to support Black-owned businesses because they are the backbone of our communities. “Small businesses need our support now more than ever. Black businesses have been disproportionately impacted by the pandemic,” he said in a statement, according to the news outlet. “You tell people, ‘stay in your house for four months, don’t leave don’t go out.’ It’s a shame 40 million Americans have lost their jobs, but in these Black communities with Black businesses, a lot of people have lost their lifelong jobs. I’m happy to support the first-ever Coalition of Black Businesses.”

O’Neal isn’t the only Lakers legend who is putting the focus on supporting Black-owned businesses amid the pandemic. Earvin “Magic” Johnson teamed up with Carver Federal Savings Bank and MBE Partners for the creation of a Paycheck Protection Program (PPP) that recently secured $325 million to support business owners of color and women-owned businesses. (Newsone)