Breaking news
By Kirby Wilson –  If professional sports teams want to get back to playing in Florida, that’s just fine with Gov. Ron DeSantis.  The Republican governor said so at a news conference Wednesday in Tallahassee, noting that several sports leagues have floated the idea of bringing teams to a centralized facility for games without fans.  “Our people are starved to have some of this back in their lives,” DeSantis said. “I think we can certainly do it in a way that’s safe.”
DeSantis specifically mentioned bringing professional soccer (MLS), baseball and basketball to Florida. During non-pandemic times, all three of those sports would be in season this time of year. Each sport has two major professional franchises in Florida.
On Tuesday, Arizona Gov. Doug Ducey announced professional sports teams in that state could resume operations starting this weekend.

Other governors, such as California’s Gavin Newsom, have been more reluctant to bring sports back, fearing future outbreaks of the coronavirus. The larger a gathering is, the greater the chance there is for transmission of the virus, the Centers for Disease Control and Prevention has advised.

DeSantis said if commissioners run into trouble elsewhere in the country, even out-of-state teams would be welcome in Florida.

“If you have a team in an area where they just won’t let them operate, we’ll find a place for you here in the state of Florida,” DeSantis said.

NEW: Pro sports teams from any city are welcome to play in Florida, Gov. DeSantis says.

“We know that it can be done safely,” the governor says. 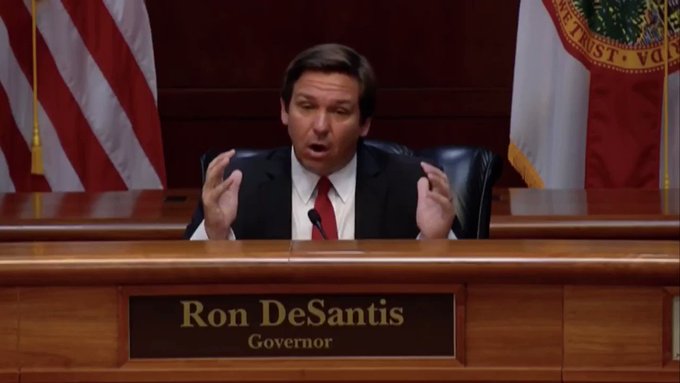 450 people are talking about this
A plan released by Major League Baseball to play a 2020 season was approved by owners earlier this week. The season envisioned by that league would start in early July in stadiums with no fans. Teams would play 82 games, mostly against geographically close competition.

“As a team that both trains and resides in Florida, we appreciate Governor DeSantis’ sentiments,” the Tampa Bay Rays said in a statement Wednesday. “We look forward to when we safely resume activity.”

The National Basketball Association, which also has two Florida teams, has been talking about restarting its season for weeks. One possibility that’s been floated by the league would have teams meeting for games at the Walt Disney World Resort in Orlando. A restart to the season would mean regular coronavirus testing for players, ESPN reported.

Once the NBA formalizes a return to play, the league indicated to teams that the plan would be to standardize coronavirus testing among the 30 teams, sources said. https://twitter.com/wojespn/status/1260404085599150083 …

ESPN story on NBA’s Board of Governors call with Adam Silver today and optimism growing toward a resumption of play this season. https://es.pn/2AgtwgG

629 people are talking about this
DeSantis did not specifically mention hockey on Wednesday, but the National Hockey League has talked about restarting its season with games at regional sites. Tampa could host one of the sites.
Become a Florida politics expert by signing up for The Buzz with Steve Contorno
Steve’s free, weekly newsletter bring top political news and analysis right to your inbox.

For its part, Major League Soccer has also discussed playing its season at the Disney campus, the Washington Post reported this week.

DeSantis on Wednesday had two words for that league’s reported proposal.

“Do it,” the governor said.

Information from the Associated Press was used in this report. Times staff writers Diana C. Nearhos and Marc Topkin contributed to this report.