via www.washingtoninformer.com – By Sam P. K. Collins – For the next few weeks, a multi-ethnic coalition of activists, labor organizers and religious leaders will engage elected officials and promote the passage of federal legislation which fully protects voting rights, boosts the minimum wage and abolishes a legislative tool used to protect racist policies.

The “Season of Nonviolent Moral Direct Action to Save Our Democracy,” debuted Monday with a rally on the steps of the U.S. Supreme Court under the auspices of The Poor People’s Campaign. 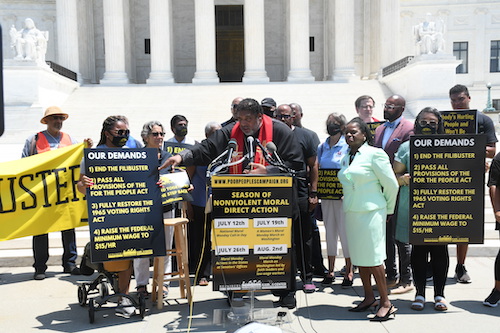 Much to the chagrin of The Rev. William J. Barber II and others, the Supreme Court recently upheld voting restrictions passed by the Arizona legislation that allegedly weakened the Voting Rights Act.

Barber serves as co-chair for The Poor People’s Campaign.

“This is a Black civil rights issue but it’s an issue for everyone who cares about democracy — who wants a government that serves all of us,” Barber said during the organization’s “National Call for Moral Revival” on July 12.

The event counted as the first of several “Moral Mondays for Season of Action” rallies with more scheduled every Monday through Aug. 6 — the 56th anniversary of the Voting Rights Act.

On that day, organizers will demand that Congress end the filibuster, pass all provisions of the For the People Act, restore the 1965 Voting Rights Act and raise the hourly minimum wage to $15.

“This is not [just] a battle against Jim Crow. We are facing interlocking injustices and we must have an intersectional movement to stop it,” Barber continued. “When they do this, whoever they are and whatever party they’re in, they’re engaging in politics that are economically insidious and theologically sinful. We must ask the question on what side they are.”

Also on Tuesday, President Joe Biden (D) delivered a speech in Philadelphia during which he affirmed his commitment to protecting voting rights and outlined a plan for doing so.

The speech followed failed attempts by Democratic lawmakers to circumvent filibuster rules and pass a sweeping voting rights, election overhaul and government ethics package. This, in tandem with the Supreme Court’s recent ruling, has stoked fears about what’s been described as the Republican Party’s assault on voting rights.

As the battle over voting rights continues, civil rights leaders joined Biden in a private meeting. Since his election, they’ve demanded that he and Vice President Kamala Harris speak out against the passage of nearly two dozen restrictive voting laws, enacted in 14 states.

Harris, in conjunction with the Democratic National Committee, has since launched a $25 million get-out-the-vote effort ahead of the 2022 elections.

The primary tenet of the “Season of Nonviolent Moral Direct Action to Save Our Democracy” rests in organizers’ desire to go beyond social media and letter writing to make their case to lawmakers.

Monday marked the start of a nationwide call-in to senators and the White House. Upcoming events involve clergy, women and members of historically oppressed groups, each of whom will continue to target lawmakers with visits and prayer.

On Monday, Linnell H.Stokes Fall, a Baltimore resident who recently faced both COVID-19 and unemployment, said nonviolent moral direct action has become a matter of life and death for her and others in her situation.

“Denial of healthcare is voter suppression. We have to fight for voting rights now: Black people, white people, indigenous people. We didn’t get the right to vote by writing letters and tweets. We didn’t ask politely. No one gave us that right in the first place. God gave us that right,” she said.