Breaking news
Local officers and firefighters faced off for the 23rd Annual Guns N’ Hoses Charity Boxing Tournament at Vystar Veterans Memorial Arena. The match ups feature committed men and women who are not professional fighters, but serve and protect the citizens of Jacksonville as civil servants. 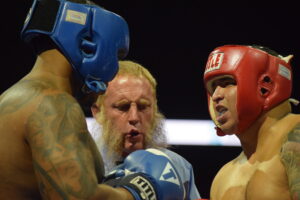 Drawing over 6,000 spectators per year, this event has raised nearly $2 Million over the years. Funds raised will be distributed to local charities through the Jacksonville Fraternal Order of Police and the Jacksonville Firefighters Charities of choice.
“Regardless of the outcome of the results in the ring, let us remember what this event is and has always been about. Our officers and firefighters literally “fight for a better community,” said David Stevens, Fraternal Order of Police Foundation. This year there were nine contenders that fought for three one minute rounds.