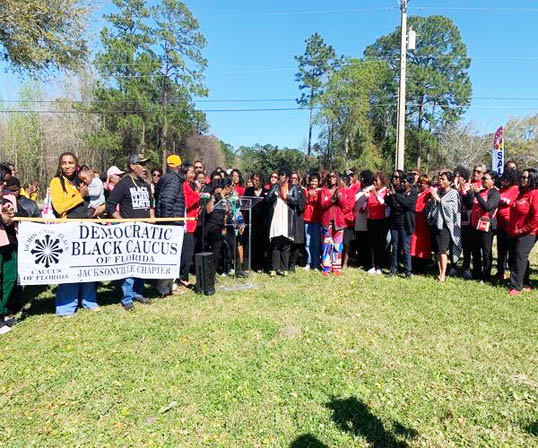 By NFM
Nearly 300 Jacksonville residents joined a press conference and marched to the polls to cast their ballot on March 7th, the first Saturday of early voting. The march was led by the Collective Voice Partners, a coalition of civic organizations who work for voter education, participation, engagement and education. Among the group were first-time voters and returning citizens whose rights were restored after the passage of Amendment 4.
“This day was about more than a march for me. I am now able to say I have a voice in shaping my own future for myself and my family,” said Muzette Thomas, New Florida Majority volunteer and returning citizen. “ It felt great to be a full citizen and a true part of my community again after 5 years.”
The delegation marched two blocks to the Highlands Regional Library and cast their ballots in what will be one of the most important elections of our lifetime.
“In a year when Black and Brown people face unprecedented voter suppression tactics, we were happy to be joined by local Floridians whose voting rights were re-enfranchised or who exercised their right to vote for the first time,” said Moné Holder, New Florida Majority Senior Program Director. “There is no greater robbery of our democracy than silencing the voices of the people, and today we said no more. 2020 is one of the most important election years in our lifetime, and we are committed to making sure everyone can have a voice and a vote.”
Early voting end March 15th and the Primary election is March 17th. While city events and buildings will be closed due to COVID-19, special provisions will be made for voting precincts.
The Collective Voice Partners include members of the New Florida Majority, NAACP, Divine Nine, The Links, Inc., Jack and Jill of America, Inc., 100 Black Men, National Council of Negro Women and D.W. Perkins Bar Association.