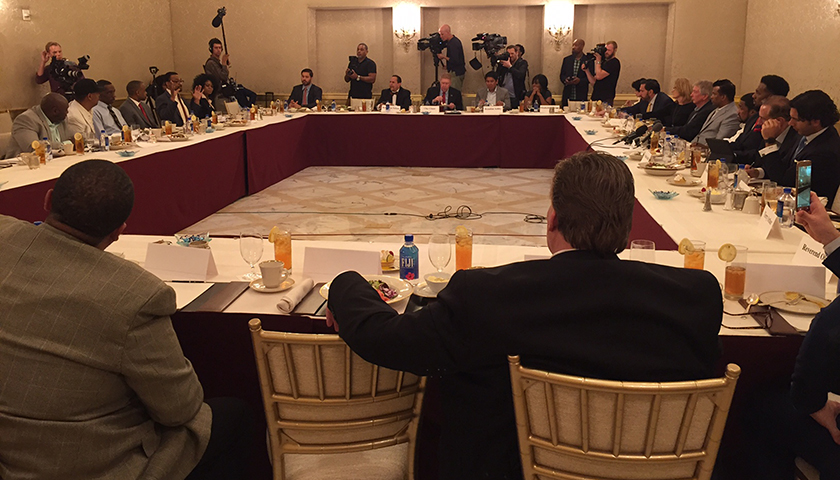 After backpedaling from claims he made in February, that gang leaders committed to “lower the body count” in Chicago in exchange for “some social programs,” Pastor Darrell Scott recently hosted a meeting in Washington, D.C. to discuss a range of issues affecting the Black community.

The “gang summit,” as it was dubbed by reporters, was held at the St. Regis hotel, a few blocks from the White House. The discussion went on for over three hours. Even though, Scott of Cleveland Heights, Ohio, convened the discussion, he spent most of the multi-hour conversation as a facilitator.

During his opening statement at the summit, Scott said that, “We know President Trump is unpopular in the Black community.”

Everyone in attendance appeared to understand the painfully obvious: that one meeting won’t solve Chicago’s complex issues around poverty, violence and the school to prison pipeline. The summit was just a first step that placed key players on these issues in the same room for the first time during Trump’s presidency.

Xavier Williams, a former gang member who spent 16 years in prison and who earned a degree in community redevelopment, spoke to the group of assembled business leaders, Trump Administration officials, clergy and community stakeholders.

Williams ran down statistics pointing out that there were five neighborhoods in Chicago that were ground zero for an endless cycle of unemployment, poverty and violence.

Williams noted that the unemployment rate in five of the most violent neighborhoods in Chicago was extremely high and those same neighborhoods also suffered the majority of school closures since 2013, a decision that was criticized by local and national education advocates.

“In 2013, the city’s mayor, Rahm Emanuel, closed 49 schools — a move that was met with widespread resistance and disproportionately impacted minority communities,” according to The Huffington Post.

Williams also said that there was no oversight over funds allocated to assist residents returning from prison.

“There needs to be an accountability system or an audit,” said Williams.

There was also an in-depth discussion about the role of church pastors in Chicago and whether or not they were helping to improve the situation. That topic would have been taboo at most roundtable discussions.

“I’ve heard this complaint,” said Scott. “That the money goes into the church and doesn’t go into the community…they see how the pastor is living and they wonder,” Scott added to nods of recognition around the room.

Sitting around a large rectangular set of connected tables as lunch was served, were Trump HUD official Richard Youngblood, James Holland of the NRA, Pastor Dean Nelson of the Frederick Douglass Foundation and Cleveland activist Kareem Lanier as well as about twenty others. Some who attended were from the business community, some were leaders of community groups and others were deep-pocketed investors who wanted to know how they could help Chicago.

“We believe [President Donald Trump] will be the one to help the Black community on housing renovation and neighborhood revitalization,” said Lanier during the session.

According to a 2017 report on crime rates by the Brennan Center for Justice at New York University School of Law, “While murder rates have increased in some cities, this report finds no evidence that the hard-won public safety gains of the last two and a half decades are being reversed.”

The report continued: “With violence at historic lows, modest increases in the murder rate may appear large in percentage terms. Similarly, murder rates in the 30 largest cities increased by 13.2 percent in 2015 and an estimated 14 percent in 2016. These increases were highly concentrated. More than half of the 2015 urban increase (51.8 percent) was caused by just three cities, Baltimore, Chicago, and Washington, D.C. And Chicago alone was responsible for 43.7 percent of the rise in urban murders in 2016.”

Even though, “Today’s crime rate is less than half of what it was in 1991,” according to the Brennan Center, President Trump ratcheted up the “law and order” rhetoric during the first 100 days of his presidency.

In January 2017, Trump said, “Afghanistan is not like what’s happening in Chicago” during an interview with ABC.

That same month, Trump tweeted a warning to Chicago’s political establishment: “If Chicago doesn’t fix the horrible ‘carnage’ going on…I will send in the Feds!”

In February, during a meeting with sheriffs, Trump claimed that the murder rate in the U.S. was the highest it’s been in 47 years.

“Did you know that? Forty-seven years,” said Trump, according to the Chicago Tribune. “I used to use that—I’d say that in a speech and everybody was surprised. Because the press doesn’t tell it like it is. It wasn’t to their advantage to say that.”

That statement from the new president, like so many others, was inaccurate.

“The most recent annual FBI statistics available show the national rate for murder and non-negligent manslaughter in 2015 was 4.9 per 100,000 people,” the Chicago Tribune reported. “That was lower than every year between 1996 and 2009, when the rate fell from 7.4 killings per 100,000 people to five for the same population.”

Whether Trump can pivot away from his “law and order” rhetoric and inaccurate statements about crime in urban communities and towards policies that involve economic development and neighborhood revitalization remains unclear.