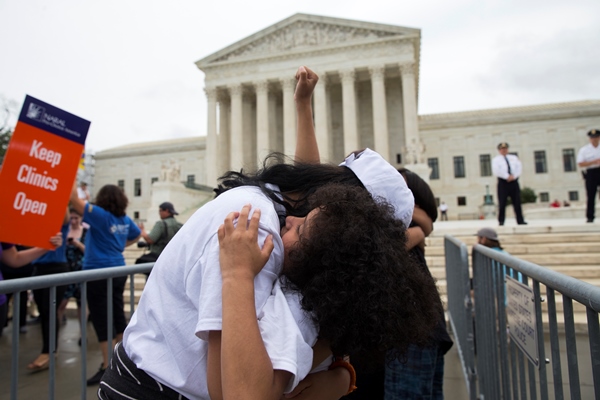 Jackelin Alfaro, 7, of Washington, hugs her aunt Gelin Alfaro, of Veracruz, Mexico, during an immigration rally at the Supreme Court in Washington, Thursday, June 23, 2016. A tie vote by the Supreme Court is blocking President Barack Obama’s immigration plan that sought to shield millions living in the U.S. illegally from deportation. The justices’ one-sentence opinion effectively kills the plan for the duration of Obama’s presidency. (AP Photo/Evan Vucci)

by By MARK SHERMAN

WASHINGTON (AP) — The Supreme Court deadlocked Thursday on President Barack Obama’s immigration plan that sought to shield millions living in the U.S. illegally from deportation, effectively killing the plan for the rest of his presidency.

The outcome underscores that the direction of U.S. immigration policy will be determined in large part by this fall’s presidential election, a campaign in which immigration already has played an outsized role.

People who would have benefited from Obama’s plan face no imminent threat of deportation because Congress has provided money to deal with only a small percentage of people who live in the country illegally, and the president retains ample discretion to decide whom to deport. But Obama’s effort to expand that protection to many others is effectively stymied.

Obama said Thursday’s impasse “takes us further from the country we aspire to be.”

The 4-4 tie vote sets no national precedent but leaves in place the ruling by the lower court. The justices issued a one-sentence opinion, with no further comment.

A nine-justice court agreed to hear the case in January, but by the time of the arguments in late April, Justice Antonin Scalia had died. That left eight justices to decide the case, and the court presumably split along liberal and conservative lines, although the court did not say how each justice voted.

In this case, the federal appeals court in New Orleans said the Obama administration lacked the authority to shield up to 4 million immigrants from deportation and make them eligible for work permits without approval from Congress.

The Obama administration announced the programs — protections for parents of children who are in the country legally and an expansion of the program that benefits people who were brought to this country as children — in November 2014. Obama decided to move forward after Republicans won control of the Senate in the 2014 midterm elections, and the chances for an immigration overhaul, already remote, were further diminished.

The Senate had passed a broad immigration bill with Democratic and Republican support in 2013, but the measure went nowhere in the GOP-controlled House of Representatives.

The states quickly went to court to block the Obama initiatives. Their lawsuit was heard by U.S. District Judge Andrew Hanen in Brownsville, Texas. Hanen previously had criticized the administration for lax immigration enforcement.

Hanen sided with the states, blocking the programs from taking effect. The 5th U.S. Circuit Court of Appeals also ruled for the states, and the Justice Department rushed an appeal to the high court so that it could be heard this term.

Had Scalia still been alive, though, he almost certainly would have voted with his fellow conservatives to form a majority in favor of the states.

In practical terms, a victory by presumptive Republican nominee Donald Trump could mean an end to the programs anyway, since he has vowed to deport the roughly 11 million immigrants who are in the United States illegally.

If Hillary Clinton, the presumptive Democratic nominee, is elected, she could attempt to revive the programs or work with the new Congress on comprehensive immigration legislation.

If Clinton wins, the Senate will at some point fill the vacancy created by Scalia’s death — either with Obama’s nominee, Judge Merrick Garland, or a Clinton choice. In either case, legal challenges to executive action under her administration would come to a court that would have a majority of Democratic-appointed justices and, in all likelihood, give efforts to help immigrants a friendlier reception.