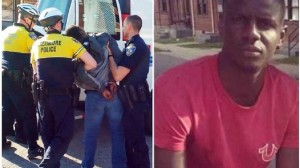 BALTIMORE (Reuters) – Baltimore police officer Caesar Goodson Jr. on Thursday was cleared of criminal wrongdoing in the death of Freddie Gray, a black man who died of injuries sustained while in police custody.

Baltimore City Circuit Court Judge Barry Williams found Goodson, who is also black, not guilty of all criminal counts including second-degree depraved heart murder, the most serious accusation against any of the six officers charged in connection with Gray’s death.

Prosecutor had failed to secure convictions in two earlier trials of police officers.

Goodson, 46, was the driver of a police transport van in which Gray broke his neck in April 2015. He had also faced three counts of manslaughter, and single counts of reckless endangerment, second-degree assault and misconduct in office.

“This court is satisfied the state has failed to show” evidence of the crimes, Williams said. Goodson, a 16-year veteran of the force, had waived his right to a jury trial, choosing to have the judge determine his fate.

Goodson, a soft-spoken man who had been visibly nervous and during the proceedings, smiled upon hearing the verdict.

Attorneys for each side declined to comment following the ruling, citing a gag order imposed by the court as a result of the multiple cases that remained to be prosecuted.

Williams’ decision makes it less likely prosecutors will be successful in their attempts to convict the three officers yet to stand trial, said Tim Maloney, a civil rights attorney with Joseph Greenwald & Laake.

“This is what happens when you make charging decisions in the heat of a riot instead of reviewing evidence in the cool light of day,” Maloney said.

Gray’s death sparked a day of rioting and arson, followed by weeks of protests in the majority African-American city of 620,000 people.

It came at a time of fierce national debate over the use of excessive force by police, especially against black men amid questionable deaths in New York, Cleveland and Ferguson, Missouri.

The deaths and ensuing protests gave rise to the Black Lives Matter movement.

Baltimore State’s Attorney Marilyn Mosby announced that she would file charges four days after the riots that followed Gray’s funeral, surprising some observers for its swiftness.

“While it may have been successful in quelling the civil disturbance, it created a profound injustice for these officers,” Maloney said.

Tessa Hill Aston, president of the Baltimore chapter of the NAACP civil rights group was disappointed by the decision.

“There has been no justice for Freddie Gray,” she said. “The criminal charges didn’t hold up in court, but that doesn’t mean the police didn’t do something wrong in the eyes of the community.”

Prosecutors contended Goodson gave Gray a “rough ride,” failed to ensure his safety and should have called a medic.

“That is an inflammatory term … that when uttered is not to be taken lightly,” said Williams.

Goodson’s defense team argued that Gray caused his own injuries by falling inside the transport van. Goodson also lacked the training to recognize that Gray was hurt, they said.

Gray, 25, was arrested after fleeing police officers in a high-crime area. He was bundled into Goodson’s van shackled and not secured with a seat belt inside the van, a violation of police procedure.