Fabiana Pierre-Louis was sworn in Tuesday as the newest member of the New Jersey Supreme Court, officially becoming the first Black female justice in the state’s 224-year history. 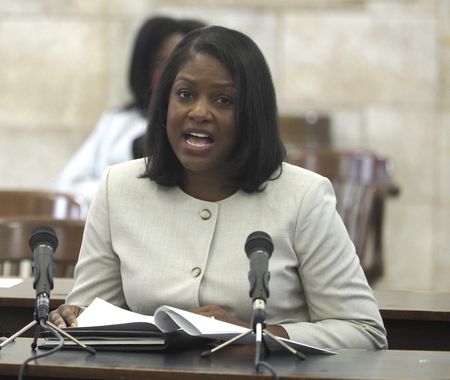 A former federal prosecutor who grew up the daughter of Haitian immigrants, Pierre-Louis took the oath during a private ceremony in Trenton. Gov. Phil Murphy, who nominated her in June, was there to look on.

Pierre-Louis is only the third Black justice in the court’s history and its youngest current justice by about two decades. She turns 40 later this month.

Pierre-Louis, who most recently worked as an attorney in South Jersey, was confirmed by the state Senate last week.

Murphy and state lawmakers have said Pierre-Louis was chosen because of sterling resume and sharp mind. But they also stress that she will give a new perspective to the bench at a time when the nation continues to wrestle with unrest over racial injustice.

The governor said in a tweet that “history was made” Tuesday.

Pierre-Louis replaces Justice Walter “Wally” Timpone, an appointee of former Gov. Chris Christie who stepped down from the bench Monday, a few months before he reaches the mandatory retirement age of 70.

Like Timpone, Pierre-Louis is a Democrat — which means the Supreme Court will continue to be made up of three Democrats, three Republicans, and one independent.

Pierre-Louis must serve seven years before state lawmakers will consider giving her lifetime tenure. Because she’s so young, she has the possibility of helping shape the court for three decades.

A first-generation American, Pierre-Louis grew up in a seven-member family and lived in a two-bedroom Brooklyn apartment before moving to Irvington. Her father drove a New York City taxi and her mother workers for years at a Manhattan hospital.

After getting her undergrad degree from Rutgers University-New Brunswick, Pierre-Louis graduated with high honors from Rutgers Law School in Camden and later served as a law clerk for state Supreme Court Justice John Wallace Jr., the last Black member of the court.

Pierre-Louis then spent nine years as a prosecutor in the U.S. Attorney’s Office for the District of New Jersey. She was the first woman of color to run both its Trenton and Camden offices.

Our journalism needs your support. Please subscribe today to NJ.com.

Brent Johnson may be reached at bjohnson@njadvancemedia.com.

For more on the original article visit: https://www.nj.com/politics/2020/09/nj-now-has-1st-black-woman-on-state-supreme-court-fabiana-pierre-louis-was-just-sworn-in.html