Muhammad Ali, the three-time heavyweight champion who proclaimed himself “the Greatest”, defied the US government over the Vietnam war, and later became one of the most well-known – and loved – sportsmen in history died at the age of 74.

Muhammad Ali died late on Friday at a hospital in Phoenix, Arizona.  His funeral will take place in his home town of Louisville, Kentucky.

Ali was admitted to hospital on Thursday with a respiratory problem – a move that was described at the time as “a precaution”. However, reports emerged 24 hours later which said he had been placed on a life support machine and his family “feared the worst”.

Ali had become increasingly frail since being diagnosed with Parkinson’s disease in 1984, aged 42, and in recent years had limited his public appearances. Earlier this month his brother Rahman Ali revealed that the condition was so advancedhe could barely speak or leave his house.

As a sportsman he will be remembered for many classic fights – in particular beating the fearsome Sonny Liston to become champion; the Fight of the Centuryand the Thrilla in Manilla against Joe Frazier, and the Rumble in the Jungle in 1974 when, at the age of 32, he surprised everyone bar himself by cutting down George Foreman in Kinshasa to regain back his title.

Paying tribute after his death, Foreman wrote: “Ali, Fraser and Foreman we were one guy. A part of me slipped away.”

He told the BBC: “Muhammad Ali was one of the greatest human beings I have ever met. No doubt he was one of the best people to have lived in this day and age.”

Tributes flooded in from the world of boxing, the wider sporting community and well beyond them. The former US president Bill Clinton described him as “courageous in the ring, inspiring to the young, compassionate to those in need, and strong and good-humored in bearing the burden of his own health challenges”.

Ali’s influence out of the ring was no less marked. Having appalled white Americaby converting to the Nation of Islam and changing his name from Cassius Clay to Cassius X and then to Muhammad Ali, he later refused to be drafted into the army, telling reporters: “Man, I ain’t got no quarrel with them Vietcong.”

In 1967, still unbeaten and with no obvious challenger in sight, Ali was stripped of his titles and for three-and-a-half years had to scrape a living making campus speeches and appearing on Broadway. He lost his best years as a fighter yet as the opposition to Vietnam war grew, so did Ali’s popularity. By the mid 1970s he was the biggest sports star on the planet.

In his physical prime, a decade earlier, Ali had such grace and foot speed that watching him perform almost became an extension of the balletic arts. He won Olympic light-heavyweight gold as an 18-year-old at the Rome Olympics and four years later, in 1964, he won the heavyweight title for the first time by stopping Liston in a major upset. Challengers were dispatched with a surgical beauty, although there was a vicious streak to him too: when Ernie Terrell called him by his birth name, Cassius Clay, Ali shouted at him “What’s my name?” as he inflicted a terrible beating.

In 1971, within five months of his return in 1970, he earned a shot at his old title against Frazier, but no longer was he as elusive or brilliant. A thrilling contest ended with Ali suffering his first defeat, on points, after being dropped by a left hook in the 15th round.

A loss to the fit but limited Ken Norton appeared to confirm Ali’s decline – until, in 1974, he knocked out Foreman after using what he called “rope-a-dope”; lying on the ropes to conserve energy as his opponent punched himself out. Later, when Ali was asked when he should have retired, he admitted it was after that fight.

But he ploughed on, to a desperately gruelling decider with Frazier in Manilla which he won after Frazier’s trainer Eddie Futch pulled his man out before the 15th round. Ali would later call it the closest thing to dying he could imagine.

In 1978, after winning the title for a third time by avenging a loss to Leon Spinks, Ali retired. When he dragged himself back into the ring in 1980 to face his old sparring partner Larry Holmes, aged 38, he was probably in the early stages of Parkinson’s disease. Tests carried out by the Mayo Clinic found he couldn’t hop on one foot well and had trouble co-ordinating his speech. 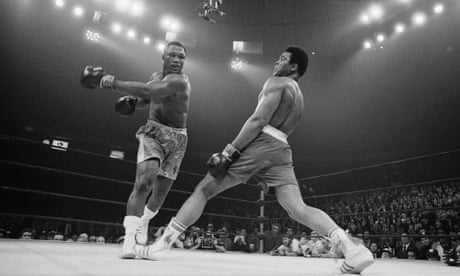 After a final fight, against Trevor Berbick in 1981, he retired but three years later Parkinson’s disease was diagnosed. By the end of the decade the speech of the man once dubbed “the Louisville Lip” for brash predictions before fights was reduced to a mumble.

Ali was well enough to light the torch to start the 1996 Olympics in Atlanta, though his hands shook as a result of the disease taking further hold. After that there was further retreat into privacy and prayer.

But even in death his legacy burns on.