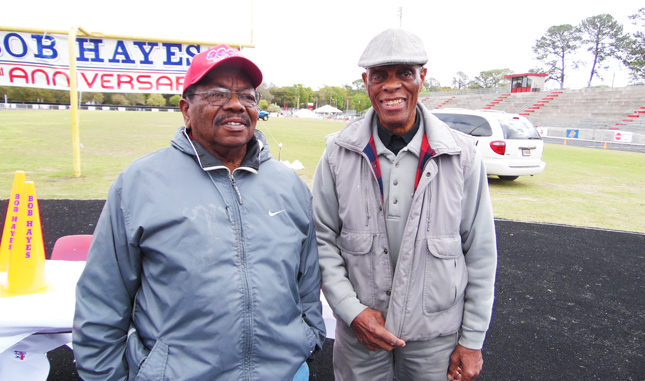 The iconic track meet that for nearly 60 years has been housed at the Northside’s Raines High School is now at the center of controversy as the school’s administration has decided to move the annual meet named after hometown Olympian Bob Hayes.

Calling it a tough and emotional decision but the right one for right now, Greg Coleman, the executive director of the longtime event, said the decision to move the track meet to UNF was necessary to take it to the next level and beyond. Coleman recently took over as the meet’s director after longtime director Coach James Day passed unexpectedly last year.
According to Channel 4, Coleman named numerous factors contributing to the decision to uproot the event from its Northside home and relocate it to the other side of town. Traditionally people from the neighboring community joined those from around the state to witness to the athletic competition for high school students. A former professional athlete himself, the Raines’ alumnus and former NFL athlete said that it still meant some tough conversations had to happen.

“As we finished last year’s meet, we immediately begin to do some due diligence to see how we can make this meet better, how we can take it to the next level,” Coleman said. “Obviously, there’s no secret that we know that we’ve had some problems. We know that Raines is slated for a rebuild at some point in the future. And when that happens, and when that facility comes back online, we will definitely revisit that.”

Coleman said that before Day’s death, Day had shared how he wanted to push the event to a bigger
stage.
That vision included hosting by UNF, noted for its facilities which has hosted meets as well as the NCAA regional championships.

“Coach Day and his wife Yvonne have attended several championships here and discussed the vision of possibly one day hosting the Bob Hayes here at Hodges Stadium,” said UNF deputy athletic director Ervin Lewis. “Well, the time has finally come. We are humbled and we’re grateful for the opportunity.”

Longtime friend and fellow colleague of James Day, “Coach” Nathaniel Farley, said that while he knew Raines had its issues ranging from concessions to parking, he never heard Day say he wanted the beloved track meet moved.

“I knew he wanted more, but I never heard him mention a move.” The two were members of the African-Americans Coaches and Game Officials Athletic Association and Farley was also appointed to the Bob Hayes Track Meet Board before he died but never had an opportunity to be installed.
Others in the community see the move as far more than just a location change.

“We have seen the dismantling of Jacksonville’s Black institutions over the years. The School desegregation plan, which integrated Jacksonville’s schools put the burden of school desegregation on Jacksonville’s Black community. The bottom line is that White Jacksonville did not consider Black Jacksonville schools “good enough” to educate White children, nor were they good enough from which White children would graduate. Yet it was OK for Black children to graduate from a high school named after the founder of the Ku Klux Klan,” said historian Rodney Hurst.
In its lifetime, The Bob Hayes Track Meet was held at Matthew Gilbert, Northwestern and Douglas Anderson during its early years before moving to Raines in 1968 where Day took over race director duties.

“I am in full agreement with this opportunity because it is all about the students.” said Raines principal Vincent Hall.
From social media to concerned citizens the outrage continues.

“If we allow the Bob Hayes Track Meet to move from its roots in the Black community to White Jacksonville, it is because we are NOT ready to do whatever, including raising HELL to keep it on “our side of town,” said Hurst.

The event is named after the Bob Hayes, a two-time Olympic gold medalist, former Dallas Cowboy and Pro Football Hall of Famer held its 57th meet last March.
Hurst has hopes the community will wake up and see they have something to fight for in standing up for the revered track meet remaining at William M. Raines, a historically black high school built for the community post segregation.

“Bob Hayes IS you, me, Matthew Gilbert, Out East, the Northside, Raines, and Bob Hayes IS Black and Brilliant. Bob Hayes IS NOT the UNF,” said Hurst.