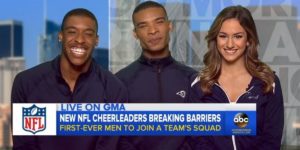 Quinton Peron and Napolean Jinnies joined Good Morning America to discuss what process they went through to join the team.

“I thought, ‘Why not me? Why can’t I do this?’ And called my friend and I asked her when auditions were for the Rams and she told me Sunday [March 11] and I showed up,” Peron told Good Morning America.

Both men are natives to California and were in an audition pool with 76 finalists who hoped to make the Rams cheer team. When they found out they made the squad, they were ecstatic.

“They were unlike anything I’ve ever been to. I’m used to getting a call after or an email,” Jinnies said about the audition process. “This one was about three weeks long and we had a bunch of rehearsals in between and an extensive interview process, but it was really humbling and amazing to be invited every time you came back.”

It’s not completely surprising that the men made the team because they are both classically-trained dancers who have been performing their whole lives. LA Rams cheerleader captain Emily Leibert told Good Morning America the men were chosen for more than their dance skills.

“They really just fit the bill to be a Los Angeles Rams cheerleader. They are intelligent, they are eloquent, they are more than qualified to be ambassadors out in the community,” Leibert said. “They bring so much energy and there’s something so magnetic about their performance, you really can’t take your eyes off them.”

Although the Baltimore Ravens and the Indianapolis Colts have male stuntmen, Peron and Jinnies will join the team of 40 cheerleaders and perform as traditional cheerleaders.