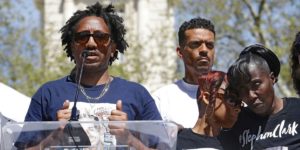 It was previously, reported that Matt Barnes attended and spoke at a peaceful demonstration in honor of Stephon Clark on Saturday in Sacramento. Apparently, words aren’t the only thing the former NBA player is offering.

While holding one of Clark’s sons, the one-time hometown basketballer spoke about being a father to the two boys, and afterward, announced he’s launching a scholarship fund for the Clark boys to ensure they go to college.

“So like what we’ve been talking about today, we didn’t want to lose sight of why we’re here,” he continued. “Thank you to everybody who came out and kept it peaceful. We’re going to get some accountability for the stuff that continues to go on and we’re doing it for the kids right here. I’m in the process of starting a Clark Boy scholarship fund to make sure these boys go to college. Like I mentioned earlier, this isn’t a Sacramento problem this is a nationwide problem.”

Stephon Clark was killed on March 18 after police shot him 20 times, eight of which were in the back, for simply holding out a cellphone.

This news comes as it was reported that a Sacramento sheriff’s SUV struck and injured a woman during a candlelit vigil also honoring Stephon Clark. The woman was taken to a nearby hospital and treated for minor injuries.