“Mr. Pearson was an instrumental leader in the fight for civil rights and his efforts, both locally and nationally, helped change Jacksonville’s cultural landscape,” Rep Lawson said during the ceremony.

State Sen. Audrey Gibson, Jacksonville Branch NAACP President Isaiah Rumlin, local historian Rodney Hurst and members of Pearson’s family were also a part of the ceremony, which was emceed by WJAX’s Dawn Lopez. Jacksonville Beach Councilwoman Chris Hoffman presented the Pearson family with a proclamation on behalf of the City of Jax Beach.

As a young man, Pearson had a successful baseball career with the Birmingham Black Barons of the Negro League. Exceptionally talented in baseball, he had the opportunity to play baseball in his hometown, however, because of his race, the Jacksonville Beach Seabirds rejected the notion of having Pearson join their team. In fact, the team disbanded to prevent Pearson from joining.

This experience propelled Pearson to pursue a career in education and to join the Civil Rights Movement. In 1961, he was elected president of the Jacksonville Branch of the NAACP.  He was later elected President of the Florida State Conference of the NAACP. Pearson also taught history at Isaiah Blocker Junior High School and coached baseball at New Stanton High School. He died in a car accident in 1967 at the age of 37.

The ceremony culminated a journey that began in March 2016 for the rare process of renaming a regional postal facility. Olympian and NFL pro Bob Hayes was also in consideration for the honor. 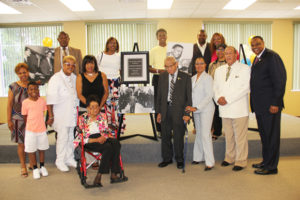