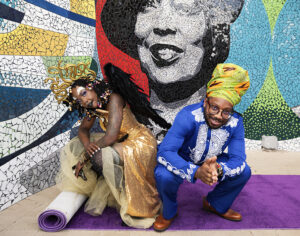 Following the premier, cast, crew and fans gathered in the Main Library courtyard for dinner, dancing and music.  The team now plans to enter the film festival circuit and start touring the film before shopping it to a streaming platform.  Shown is filmmaker Ebony Payne English and Executive Producer Jerome “Jody G” Seabrooks.