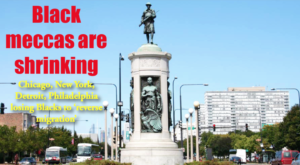 Black meccas – the promised land in big cities that once drew people of color seeking the American dream, are shrinking. The ethnic identity and Black population of urban neighborhoods are eroding as whites and other racial groups move away from the core of big cities.

It’s happening in the nation’s four biggest cities with the highest Black populations. Chicago, New York, Philadelphia and Detroit are on a downward spiral, continuing a trend that began in 2013.

It’s the latest wave in what is called the “Reverse Migration.” Blacks are now flocking to Southern cities that hordes of Blacks fled during the Great Migration in the 1940s and 50s. Gentrification and gun violence are forcing Blacks to leave behind Black meccas that are filling up with new white residents while shedding the ethnic identity they had for decades.

The most dramatic drop is in the Black population of Chicago. The U.S. Census Bureau estimated that more than 14,000 left Cook County between 2016 and 2017. The Black exodus has dropped the number of Blacks in Chicago by 1.15 percent. Once considered a Black mecca, in 2010, Blacks made up 34 percent of Chicago’s population. Now, 29 percent of the city’s residents are Black, and Hispanics are now Chicago’s largest minority group that make up 30 percent of the city’s population. Overall, Chicago has been losing residents at over 61,000 annually, but the city still has the second highest Black population in the nation. The Black exodus from Chicago threatens to drop the city to the nation’s fourth largest city behind Houston, whose population may surpass the Windy City’s by 2025.

The Black population continues to decline in Harlem, where people of color have lived for decades. Today, only 28 percent or 112,990 residents of the 402,961 residents are Black, according to an analysis of the latest Census data. 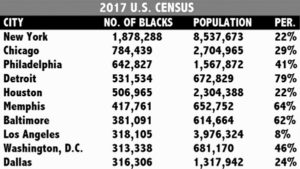 Harlem has been gentrifying since former President Bill Clinton opened his campaign office there in the 1990s. The world-renowned neighborhood has experienced an influx of tourists and developers whose high-end housing and hip restaurants have created rent bills so high they have pushed out Blacks who have lived there for generations. Today, it’s common to see whites and other ethnic groups eating lunch at Sylvia’s Soul Food on Malcolm X Blvd.

The Renaissance—where Duke Ellington performed—and the Childs Memorial Temple Church of God in Christ—the site of Malcolm X’s funeral—have been demolished. Night- life fixtures like Smalls’ Paradise and Lenox Lounge are gone. The storied 73-year-old Lenox Lounge, where artists, like Billie Holiday and Miles Davis once performed, was forced to close in 2012 because of rising rents.
Detroit became the nation’s largest predominantly Black city when whites fled for the suburbs under the leadership of Mayor Coleman Young in the 1970s.

Once a major city, Detroit’s overall population fell dramatically during the Great Recession. Blacks in Detroit are now 79 percent of the city’s 672,829 residents.

Philadelphia still has the nation’s third highest Black population with 642,827 residents or 41 percent of more than 1.5 million. That percentage was higher in 2010, when Blacks made up 45 percent of the population in the city of Brotherly Love. In 2013, it was still 45 percent, and in 2015, 44 percent.

Today, many Blacks are flocking to cities in the South, including Atlanta, Houston and Charleston, SC. Experts say jobs, the cost of living, family and the quality of life are all driving the Black exodus from the Northern cities.
In 2010, there were 498,466 Blacks in Houston or 24 percent of the city’s 2.1 million residents, according to Census figures. Today, there are 506,965 residents of color in Houston.

Perhaps, the city that is posting the biggest gains is Atlanta’s metro region. The city itself has only 472,506 residents with 50 percent of them Black. However, according to the census, some 89,000 new residents moved to the Atlanta metro region in 2017.
Currently, metro Atlanta’s population totals 5.8 million. Experts say the region’s flourishing economy and increasing job opportunities are fueling the region’s growth. The region is growing at such a fast pace that the Atlanta region is expected to overtake Philadelphia as the United States’ eighth-largest by 2022, according to U.S. Census data.

Atlanta’s 2017 growth rate of 1.5 percent—higher than eight of the top ten American metro areas—is reflective of the region’s blossoming economy and increasing job prospects. In total, 89,000 new residents moved to the region in 2017.
New York metro area still holds the No. 1 spot with a population of 20.3 million.