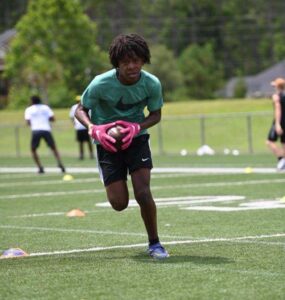 Creek’s Plantation Park at their B2B Wide Receiver Academy camp. The brother’s mission was to provide young athletes from the First Coast a chance to shine and land possible new opportunities in the sports industry. Players from Pop Warner all the way through high school levels from ages 5-18 participated and showed their skills on the field. In attendance were coaches of all divisions and some college scouts, along with local motivational speaker, Omar Simmons. Coach Jerrand noted the importance of this event, “When the young athletes know they are being watched, they work harder. You never know whose going to be the next best thing. So, this event is always a good way to bring out talent of all levels so that other coaches and scouts know who to keep their eyes on. It’s a great networking opportunity that lets everyone know who and what’s out there. And it also allows the players to see where they are individually,” said Coach Jerrand, a personal trainer, gym owner and former arena level wide receiver for the Ohio Valley Greyhounds. Older brother, Carl, has a decorated career on all three levels of football to include his stint with the NFL’s Buffalo Bills and is currently the head coach at a local private school. 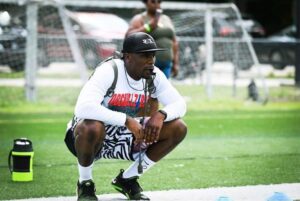 The Brother’s Nesmith both state that being raised in a single parent home off North Jacksonville’s Myrtle Avenue has been their motivation to mentor, train, and guide local youth. They’ve both built stellar reputations for grooming raw talent and being role models. “What we’ve been to others is what we both needed growing up. So, we took the initiative to become that safe space for young people, namely young, Black males, and keep them busy and focused. We heavily enforce discipline and structure,” said Carl Nesmith The brothers care about their village and have been funding their own program for over a decade.  “Whatever it takes,” states Jerrand. “There’s a scripture in the Bible that says, ‘Thy word is a lamp unto my feet, and 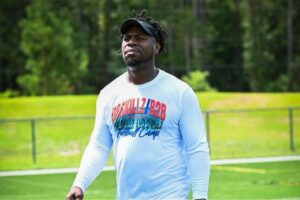 a light unto my path.’ Sometimes God will use you to be that light for somebody else. And we’ve dedicated our lives to that.” Shown are the football students ready to work out for the coaches. (Theresa Marie Blair photos @904football)