Atlanta, GA – The 100 Black Men of America, Inc. (100)has hired John E. Armstrong as the organization’s new President and CEO. Armstrong officially took the helm of the 100 on Monday, January 14, and was celebrated by members, staff, family and supporters during a welcome reception hosted by the organization’s Board of Directors. Armstrong is a native of Jacksonville, Florida where he attended Jean Ribault High School. After graduation, Armstrong attended Morehouse College and received a Bachelor of Arts in Education degree. He holds an MBA with a concentration in non-profit management from Springfield College.

Prior to joining 100 Black Men of America, Inc. Armstrong worked in a wide variety of roles at local and national not-for-profit organizations. Armstrong’s last role was an Executive Director at the American Diabetes Association. He oversaw fundraising, operations, program development, board governance and strategic direction for the states of Alabama and Georgia. John spent 17 years with the YMCA, working at local associations and the national headquarters. During his tenure with the YMCA, John established collaborative partnerships with housing authorities, hospitals, colleges and universities. John raised over $30M to support capital projects, programs and annual support for YMCA’s in the United States, Mexico, South Africa, China and Brazil.

100 Black Men was founded as an organization in New York City in 1963. The national organization, 100 Black Men of America, Inc. began with nine chapters in 1986 as a national alliance of leading African American men of business, public affairs and government with a mission to improve the quality of life for African Americans, particularly African American youth. These visionaries included businessmen and industry leaders such as David Dinkins, Robert Mangum, Dr. William Hayling, Nathaniel Goldston III, Livingston Wingate Andrew Hatcher, and Jackie Robinson. Since inception, the vision emerged and grew to over 10,000 members impacting over 125,000 underserved, underrepresented minority youth annually. Visit www.100blackmen.org for more information on the programs and initiatives of 100 Black Men of America, Inc. and their global network of chapters. 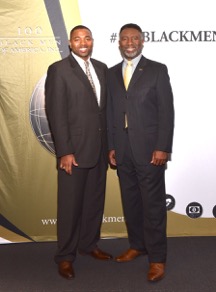