That was the best day ever,” said Nakiesha Tinsley as she reflected on the day she found out that she was a Duval County Teacher of the Year finalist.

The health and physical education teacher at Matthew Gilbert Middle School never dreamed she would receive such an honor. Tinsley’s journey to becoming a world-class educator began as a middle school student in Augusta, Ga. According to Tinsley, her gym teacher sparked her passion to become a physical education teacher. “She was older, but she was so active. Everybody loved her,” said Tinsley.

Tinsley said that one obstacle that she faced when deciding to be a PE teacher was stigma that came with teaching physical education. Her cousin, Crystal, urged her to follow her passion and pursue PE despite criticism from her college classmates for her desire to teach gym.

After receiving her college degree, Tinsley found herself at Matthew Gilbert Middle School, where she has educated students for 23 years later.

“I have kids whose parents come for open house asking if I was the one who taught them,” said Tinsley. “I’ve taught two generations here. They’re all my babies.”

Throughout her career, she has always shared the same message with her students – You are the total package.

Tinsley describes Matthew Gilbert as a competitive, athletic school that draws student-athletes from across the district. But her goal is to ensure that her students understand they are both academically and athletically gifted.

Nakiesha Tinsley is one of five finalists for the 2019 Florida Blue Duval County Teacher of the Year. The winner will be announced at the Eddy Awards on Feb. 18th. 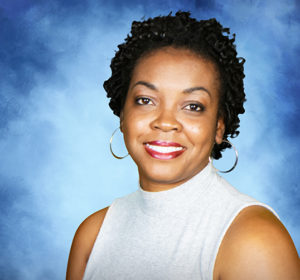