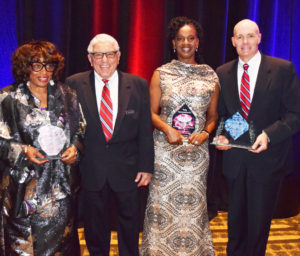 Founded in 1936, Local #1408 has been on the cutting edge of the maritime industry. History notes that several attempts had been made to organize the docks on Jacksonville’s Talleyrand Avenue prior to 1935. In 1935, a strong core of men came together and under incredible pressure formed Local 1408. The history books denote that shipping companies were not in favor of organized labor, especially a local with black dock workers. Banding together, the employers proved to be a strong opposing force. Black workers had never enjoyed unity, employment and seniority. Dock work was among the hardest and most undesirable employment in the city. Wages were almost non-existent. Workdays often exceeded 24 consecutive hours. There were no benefits and never a guarantee of work. Bus lines did not run in the dock area; most workers walked back and forth to work, rain or shine. The majority of the workers were extremely poor, uneducated, and unaware of the fact that conditions could be better. Eventually union buttons were distributed to the tiny membership, which often had to be hidden in hats, behind suspenders or under lapels. If a worker was discovered with a button, he was immediately blacklisted by employers. More importantly the men finally had a voice and that voice has resonated throughout Duval County for 80 years.

Past presidents include local Pastor, Dr. Landon L. Williams (1961-1983), businessman Charles Spencer and currently at the helm is Vince Cameron, a 20 year+ dock worker and advocate for raising the level of professionalism and executing ILA’s missions, goals and purpose. “It’s been long time coming to celebrate and recognize the local achievements and to foster a better community, while becoming a philanthropic organization,” said Cameron. Currently there are over 1,400 card carrying longshoreman in the Jacksonville area with a payroll, impacting the Jacksonville economy by more than $60 million through salaries and industry. The union has also provided millions in scholarships to local students.

The 80th anniversary celebration was hosted by Angela Spears and Rahman Johnson. Guests enjoyed dinner and photos, in addition to hobnobbing with union workers from around the country. The celebration included awarding community leaders for their hard work and dedication to Local #1408. Award recipients were Carlbenie Hilliard (Community Service Award), Jaxpot CEO Brian Taylor and Jacksonville Port Authority Board Chairman Jim Citrano and Congresswoman Corrine Brown (Pearl Humanitarian Award). The ILA Local #1408 motto solidifies their past, present and future endeavors: “Second to none, still getting the job done”.