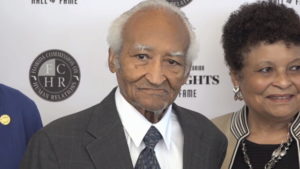 Three Floridians who fought for civil rights for African-Americans were inducted into the Florida Civil Rights Hall of Fame last week in Tallahassee. Patricia Stephens Due, Jacksonville’s former state senator Dr. Arnett Girardeau, and Willie H. Williams will now be etched in Florida’s history at the State Capitol.

The three were honored for their service in gaining civil rights for African Americans in Florida. Williams, 85, of Orlando, was the first African American hired in the engineering department at the company now known as Lockheed Martin. Patricia Stephens Due, a Quincy native, began her fight against segregation began at the age of 13 when she and her sister insisted on “white only” service at a Dairy Queen. She is most well known for participating in the first “jail-in” of the Civil Rights Movement in 1960 when she and other Florida A&M University students sat down at a whites-only counter of a Tallahassee Woolworth’s.

For Dr. Girardeau, it was about getting the right to get equal service. He participated in many of the Jacksonville sit-ins during the 1960s, including Ax Handle Saturday, and was later elected to the Florida House of Representatives and State Senate. He became the first African-American Senate pro Tempore and was a founding member and chairman of the Florida Conference of Black State Legislators. Girardeau, as the chairman of the senate subcommittee on Redistricting, created the congressional districts in Jacksonville and Miami that first enabled Corrine Brown, and now Al Lawson, to be in congress.

Former Lt. Governor Jennifer Carroll was among the representatives that sponsored the bill that created the Civil Rights Hall of Fame in addition to State Senator Tony Hill. “Their shoulders served as steps for us to climb,” said Carroll who was also present at the ceremony.