Black Music Month is not just in June. The worldwide impact of black American music can be felt across the globe year round. Its unassuming presence has had an undeniable influence on 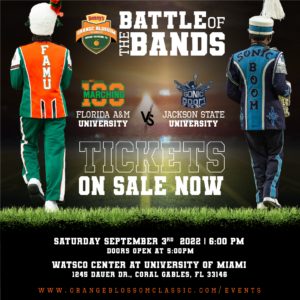 popular culture since the blues sprung from the cotton fields of Mississippi.

Deeply rooted in African American traditions of music, dance and exuberant theatrics is the Orange Blossom Classic battle of the bands. Founded in 1933 by the son of a former Florida A&M University president, the band battle became the football game’s must-see post performance.

Depending on the rivalry between schools, the pregame, halftime, and postgame shows are sometimes considered more important that the numbers on the scoreboard.

And ain’t nothing but a party going on when Jackson State University Sonic Boom of the South goes head to head with Florida A&M University Marching 100 during the Denny’s Orange Blossom Classic.

On the day before the JSU Tigers and FAMU Rattlers meet up on the gridiron Sunday, Sept. 4, the OBC battle of the bands goes down on the previous Saturday at Watsco Center at University of Miami in Coral Gables, FL.

When the amazing, high-stepping styles of the two marching bands take to the field, the music is exhilarating! The perfectly choreographed dance routines are jaw dropping. The crowd is in a frenzy, and the entire stadium erupts.

“It’s a battle in the stands as well as a battle between the two bands,” says Kendra Bulluck-Major, OBC executive director. “The fans are hype! They’re excited to see what their respective school is going to do…If I had to describe it in one word, I would say electrifying.

The inaugural Orange Blossom Classic welcomed 2,000 fans to the “blacks-only” ballpark in Jacksonville, where FAMU beat Howard 9-0 and successfully established the foundation of HBCU classics. From 1933 -1978, OBC reigned supreme as the postseason’s premier HBCU classic event. After a 43-year hiatus, the Classic made its return to Miami Gardens in 2021.

With both bands being critically acclaimed in their own right, this year’s OBC promises to attract thousands of fans, alumni, students, and family members. The Marching 100 has performed in five NFL Super Bowls, during the Summer Olympics and in inaugural parades for former U.S. Presidents George W. Bush, Bill Clinton and Barack Obama. And most recently, performing in Paris for Louis Vuitton Fashion Show.

The band was also selected to be the official United States representatives to the Bicentennial Celebration of the French Revolution in Paris, France in 1989 after being chosen as the fourth band in America and the only HBCU band to receive a Sudler Trophy (elite collegiate marching band award, equivalent to the Heisman Trophy).

Last year, the Sonic Boom performed during the Presidential Inauguration parade for Joe Biden and Vice President Kamla Harris. In her commencement speech at Jackson State in April 2016, former First Lady Michelle Obama declared the Sonic Boom as one of the best bands in the country. Both bands recently appeared together in a nationally televised Pepsi commercial.

Not only will the bands compete the day before the game, but they will also meet during game halftime on Sunday and in a post-game battle between bands.

Added to the attractions, several South Florida high school bands are set to perform. “Come out and support our HBCUs and especially support our high school students,” says Bulluck-Major.