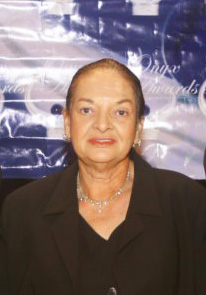 Rita Jean Eggleton Carter Perry, 80 was born on July 24, 1938, in Atlantic City, New Jersey. As a young child, her family relocated to Detroit, Michigan where she spent her youth and attended Detroit Public Schools. She was the daughter of Christine A. Eggleton Luffborough and the city’s first Black Prosecuting Attorney, Jesse B. Eggleton, Sr., who provided the foundation for her passion for equality and justice. As a young woman, she was very active in fighting for fairness and equal rights during one of our nation’s most trying times – the Civil Rights Movement.

Throughout her formative years, Rita remained actively engaged in “The Movement” by participating in Detroit’s Civil Rights protests and marching with the Rev. Dr. M.L. King, Jr.  After attending Wayne State University and the Denver Institute of Art, she returned home to Detroit to work in marketing and promotions at the world-renowned Motown Records.  She also studied at the University of Detroit, preparing herself for a career that would take her to cities all around the country.

Her entrée into the music field was spurred by her best friend, the late platinum-selling songwriter Sylvia Moy, for whom her only daughter is named. While at Motown, she worked on the creative teams of several recording artists including Stevie Wonder and Marvin Gaye. Her career in the music industry also included artist management and a stint at Stax records in Memphis, TN. Rita knew no strangers and had the uncanny ability to put people at ease in conversation. She enjoyed the exchange of interesting and creative thoughts and ideas with her family, friends, and colleagues. This gift of being able to relate to others launched her newspaper career. While visiting friends in Macon, GA, she began working at a local newspaper- the Macon Times.  She soon met and married her future husband, which led to the birth of her daughter, Sylvia. The couple relocated to Jacksonville, Florida in 1972, and Rita continued to stay in tune with her artistic roots and passion for writing. In the early 70’s she began writing for The Florida Star newspaper under the tutelage of its’ Editor and Publisher, Eric O. Simpson.

It was there that her passion for communication grew roots and she committed herself to the education and enlightenment of the public through mass media. Following The Florida Star, Rita began a long and successful career in radio at Jacksonville’s WERD, WPDQ and WZAZ radio stations. She rose through the ranks, becoming General Manager of the company’s 13 radio stations in the NE Florida market. During radio’s strongest growth period, the Jacksonville stations were ranked as some of the top stations in the country, due in large part to Rita’s contributions. While in that role she was the first president and organizer of the Jacksonville United Community Club – an organization comprised of over 15 community clubs and organizations, such as sororities and fraternities to motorcycle and social clubs – who united for one cause, to help the community in massive numbers. Under her leadership, the city of Jacksonville witnessed and experienced events such as the “Come Together Day,” which brought over 20,000 individuals together for a day of entertainment and camaraderie without violence or incident.

Following her exemplary years in radio, the bells of advocacy rang loudly, which led to the first edition of The Jacksonville Free Press in 1986. Published under the mantra, “Northeast Florida’s Quality Black Media,” Rita vowed to only print “positive” news that would empower and educate the community. Those intentional steps also made her Florida’s first founding female newspaper publisher. Over the years, the publication has been the recipient of numerous local and national awards and resulted in Rita being invited to the White House as the guest of three former Presidents. In 2018, the newspaper is still viable and committed to its core tenets, remaining an integral part of the Jacksonville community. Ms. Perry continue to be involved in the operations of the newspaper and continued to share her sage and unrivaled experience and expertise until her passing.

Ms. Perry was an extraordinary woman who had a heart for service and understood the importance of making a difference in the lives of others. She was an advocate and a change agent and never shied away from the opportunity to uplift others through service.  Ms. Perry’s past community service includes a variety of contributions from grassroots organizations and politics to civil service and Girl Scout Troop Leader. She also served on over 20 non-profit boards in the City of Jacksonville. In addition to being a charter member of both the Bold City Chapter of The Links, Incorporated and the Jacksonville Chapter of the Negro Business and Professional Women’s Club (National Council of Negro Women). Her other affiliations included the Clara White Mission Board, YMCA Board, NAACP, Jacksonville Chamber of Commerce, Jacksonville Urban League and other local, state and national organizations. Ms. Perry received numerous awards for leadership and service throughout her career including the following: The Jacksonville Urban League Clanzel Brown, The MLK Foundation Award for Exceptional Service to the African American Community, The Florida Community College at Jacksonville Award for Outstanding Achievement, The National Association of Negro Business and Professional Women’s Club Award for Invaluable Support and Contribution and The 2013 Mayor’s Trailblazer Award among a host of others. Through her commitment to helping others and passion for education, she served Jacksonville’s African-American population with pride.

Rita’s greatest accomplishment and joy in life were being mother to her daughter Sylvia, whom she loved deeply and dearly. She enjoyed great music, spending time with family and friends, traveling, collecting antiques, and civic engagement. Rita was very fond of her host of beloved pets, who showed her unconditional love and enriched her life. Rita was a member of Greater Macedonia Missionary Baptist Church, she was also a former long-standing member of Bethel Baptist Institutional Church. Rita is preceded in death by her parents – Jesse B. Eggleton, Sr., Christine A. Luffborough and Douglas Luffborough. She is survived by her loving daughter, Sylvia Carter Perry, sister Brenda Burwell, nephew Bruce Burwell (Wilneshia), niece Gabrielle Burwell, a host of cousins, several godchildren, adopted children, extended family, and close friends.