Legendary civil rights activist flew into Jacksonville this month to speak to residents on the importance of voting in the upcoming November 13th election. Jackson met with pastors, elected officials and citizens at the Baptist Brotherhood Alliance Building near Shiloh Baptist Church. Jackson resonated message was to encourage voter participation, registering youth and voter suppression. Jackson mentioned that between 1.3 and 1.7 million voters don’t have the right to vote in Florida because they have a felony conviction although they are no longer incarcerated. Jackson says his Rainbow PUSH Coalition has set up its own commission of scholars and activists to look into such voter suppression. The group is also focusing on voter registration in closely watched elections in Virginia and New Jersey. In Florida, the group is focused on restoration of voting rights for felons. Jackson also reiterated that voters should be ready to mail in their absentee ballots and make an effort to get to the polls. “We’ve noticed long lines for funerals and not long lines for voting,” says Jackson. He continued, “Don’t be concerned with the candidates complexion, be concerned with the candidates direction.” Recently Rev. Jackson received the Diversity & Inclusion Trailblazer award and the Congressional Black Caucus Foundation Lifetime Achievement Award during the 48th Annual Congressional Black Caucus Weekend in Washington, D.C. 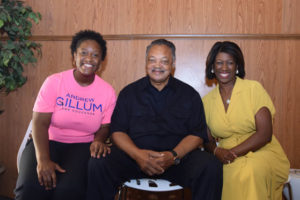