Some of the greatest African American leaders in this country’s history were graduates of Historically Black Colleges and Universities (HBCU). From Booker T. Washington and Martin Luther King, Jr. to Rosa Parks, Thurgood Marshall, Alice Walker and James Weldon Johnson, the list is quite long and impressive.

Last Saturday, two local elected officials teamed up with The Center One Foundation (COF) to hold a second annual college fair aimed at promoting the value and legacy of HBCUs to high school students.  With the collaboration of Representative Tracie Davis and City Councilman Garrett Dennis, the college fair was well attended and held at Kingdom Plaza on the Westside.

“I am excited to be an ambassador for a fair that specifically highlights Historical Black Colleges and Universities to our students, especially considering their long and rich history of being great institutions for young people to attend,” stated Representative Davis. “More importantly, HBCU’s accept and provide scholarships to help more low-income and first generation college students to ensure that all students get a fair chance at a good education.”

Although HBCUs were originally founded to educate Black students, they enroll students of other races as well. 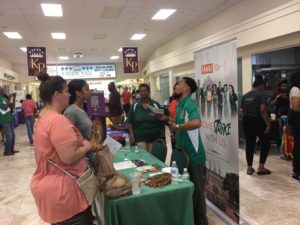