That’s why a few years ago Merriweather teamed with the Prostate Health Education Network (PHEN) to organize regular events for veterans at Post 197 that include webinars, educational materials and snacks. And that’s why Merriweather was instrumental in his post teaming with the Mayo Clinic in Jacksonville to bring similar medical resources to those considered to be underserved medically in the area. 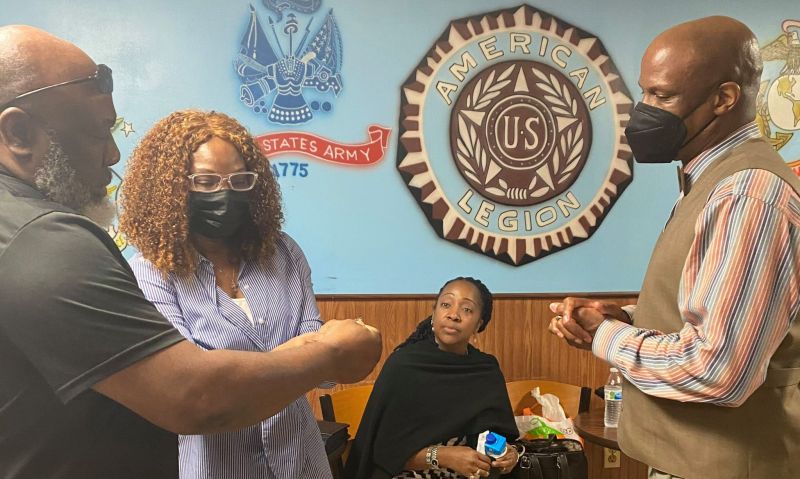 Through prior successful collaborations with Dr. Folakemi T. Odedina, Mayo’s Center for Health Equity and Community Engagement Research Associate director and its Global Health Equity Initiatives director, Merriweather helped facilitate Post 197 being designated as a Veteran and Community Health Hub for Mayo Clinic. The post will provide information on clinical trials, conduct surveys and feature a kiosk that will help anyone in the community seeking medical assistance to get vital information related to their condition.

“I believe in Post 197, so my goal was to connect the post with the Mayo organization, which I’ve been a part of for about 12 years,” Merriweather said. “I believe the partnership that we are developing as an inner-city hub for resources and clinical trial information – in an area that is not able to receive quality medical resources and services –  is how this came about.

“We’ve got veterans coming back from (deployments). They need resources besides the (Department of Veterans Affairs). This gives us an opportunity to say, ‘If you need some resources, come to Post 197.’”

Merriweather took the idea to Post 197 leadership, including Commander Cassandra Small. “The idea that he came up with sounded really good,” she said. “We thought that bringing out the post more so from a club atmosphere to a community-based atmosphere … we thought that was a good idea, so we thought we’d try it out, and it’s really grown since.”

It’s a program of which there was a strong need for in the community. “We are located in an underserved area with a lot of health disparities,” Post 197 Finance Officer Vermelle Smith said. “We just want to be a service to the community – not just to veterans, but to the community as a whole.”

Dr. Jennifer Crook, a Research Associate at the Mayo Clinic Center for Health Equity and Community Engagement Research and a registered nurse, said having Post 197 serve as a hub for the clinic is part of a critical outreach effort.

“What we hope to do is to increase awareness of the current research that’s available and offered to everyone so that we can engage underrepresented communities,” Crook said. “We really want to capture the full spectrum of research by starting with education, and just starting with a partnership and relationship with the community to figure out the places (where) they have issues, and things that are important to them. To bring that back to being researched by scientists, and then bringing those results back to the community … to help alleviate some of these disparities.

“We’ve already started a couple of research studies there. We’ve done a couple survey studies. We’re not limited ourselves to any disease groups. We really just want to identify what the community needs and partner with research to see if we can help.”

And a partnership like the one with Post 197 is a big part of those efforts. “(A lot of Post 197 members) reside in underrepresented areas, these marginalized areas that we are trying to capture, we’re trying to include,” Crook said. “This is an amazing opportunity for Mayo Clinic to have a relationship with such warriors for the community. That’s one of the unique character traits of this post. You have a really good group of individuals who have hearts for their community.”

And those hearts, Crook said, have given the hub a lot of potential. “There are a lot of good things coming,” she said. “I think that this is just the beginning, and you can see from this team that they are there and willing to put in the effort and the things that need to be done. I’ve never seen such strong champions and advocates as in this post.”

Merriweather said Post 197’s efforts to assist the community aren’t limited to the relationship with Mayo Clinic, which he said is part of continuing “to put bricks on and build this house. The partnership with Mayo is just one part of building this house. As we participate with Mayo, we have other organizations that want to partner with veterans organizations. They’re seeing what Post 197 can do when we have support from the community.”

And that support from the community is a two-way street as far as Post 197 is concerned.

“We’re celebrating our 75th anniversary this month,” Smith said. “And it’s because of the community that we’re still here. We want to give back to this community.”