Breaking news
Every year a wave takes over central Florida the week before Thanksgiving bringing tens of thousands of HBCU lovers to Orlando for the annual Florida classic. It doesn’t matter who wins or loses the well anticipated rivalry between Florida A&M University and Bethune-Cookman University – all that matters is that it happens
Jacksonville fans and alumni were among those from around the country who hit the road travelling for this year’s Classic. The football game is a culmination of weeklong events that include a 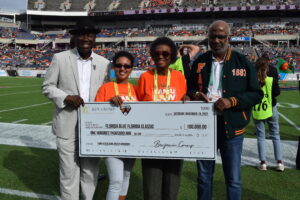 VIP “Night of Distinction,” a kickoff luncheon, Battle of the Bands and the state’s largest diversity job fair. Orlando has been home to the game since 1997, (Tampa before that). Is is the only HBCU rivalry owned and operated by its participating teams, with corporate support of the event also benefiting the universities directly.  More than 1.5 million fans have attended the Classic at Camping World Stadium since t 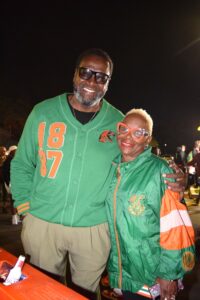 e game made Central Florida its home in 1997.
With nearly 60,000 annual spectators in Orlando, a 47 percent increase over average attendance at previous game sites, the Classic generates an estimated economic impact of $30 million on the Central Florida region each season.
The Rattlers won the game 41-20 over BCU’s Wildcats for the second straight season.