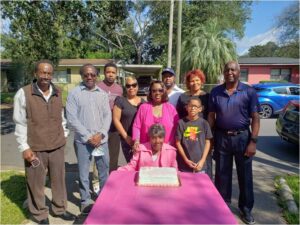 Born in the early years of the 20th Century, Mary has heard and seen it all.  Growing up in Alabama, Ivory was adamant that once she was of age she would leave the state known as the “Heart of Dixie” and the “Cotton State.”  As a young girl, she witnessed the Klu Klux Klan harass people and illiterate black men signing their as an ‘x.’
“The black man was always the “yes man,” said Ivory.
“We worked in the fields and the white children could get on the bus to go to school and we couldn’t.” Her mother, though sad, was proud to see her leave Alabama. Her mother also shared  words of support, telling her that ‘if those are your plans, don’t tell anyone, just do it!’ Before leaving Alabama she married Robert Ivory and together they moved to Jacksonville in 1941.  Ivory did odd jobs working in a restaurant, as a domestic and eventually becoming a prominent dressmaker. While working for one dollar a week and living in other people homes, her dream was to own her own home and she made it happen in 1955 with her husband and ten children. “Blacks thought I couldn’t own my own home, well I did and I’m seated in this home today,” she said.
Seated in a dress she made 40 years ago, Ivory boasts on her seamstress abilities sewing for various schools and organizations. Her resume includes sewing custom made work uniforms, majorette outfits, church and usher board uniforms and high fashion clothes for her family and friends.  Although Ivory did not graduate from high school or college, she has prospered through her gift of giving to others.  She touts that her biggest contribution to this earth are the ten children she raised as a stay at home mom.
Her children made her proud as they possess college degrees, good paying jobs and are now retired and looking after their mother as she looked after them.
She spent her birthday reflecting with family and friends on her remarkable 98 years of life. There were drive-by honks and cheers and dinner plates for those who wanted to fellowship. Many of her guests included church family from DaySpring Baptist Church, where she has been a member for 78 years.
Ivory was asked about her words of wisdom to young adults and her secret to her longevity, “You make yourself poor, you have to get up, go to work and be happy, I’ve never had any problems.” As far as the election results, “It’s in Gods hand,” said Ivory.  Mary Alexander-Ivory family includes 15 grandchildren, 10 great-grandchildren and five great-great-grandchildren.  Two of her children preceded her in death.
Shown is Mary Ivory with her children Tyrone Thomas, Leonard Ivory, Daryl Joseph, Natolya Joseph, Mary Washington (daughter), Clarence Washington, Brayden Ivory, Cynthia Ivory and Edward Ivory.