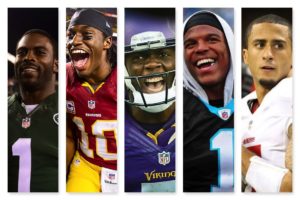 Few people know the history of African-American quarterbacks in the NFL. This question has come to me, and I thought it to be a good idea to share.  When this question comes up for discussion, those who have knowledge of football history come up with the same answer.  Frederick Douglas “Fritz” Pollard is the answer most given.  Fritz Pollard was the first head coach in the NFL, but although he had a heck of a career in football, he never played quarterback.  Fritz and Bobby Marshall (circa 1920) were running backs and Fritz held the distinction of being hailed as one of the greatest of all time.

It was 48 years later before an African-American quarterback took the field with a professional team.  In 1968, Marlin Brisco a defensive back with the Denver Broncos was moved to the quarterback position.  From this position, Brisco was named “The Magician” and became the first African-American quarterback to start at this position. Brisco broke every rookie quarterback record and despite his color became a household name at the time.  Unfortunately Brisco was his own worst enemy.  He turned to drugs and was relieved of the responsibility of leading his team.  He became a wide receiver and collected two Super Bowl rings.

After going through my notes and checking with my friend Google, I discovered I had been giving out false information. My answer on this quarterback question had been “Shaq” Harris.  Shaq broke in with the Buffalo Bills in 1969, and later moved to the Los Angeles Rams.  Shaq played at Grambling College and set the tone for another record breaker.  I am sure you have heard of Doug Williams who in one day set or broke too many Super Bowl records while conducting a clinic for the Denver Broncos.

In Doug’s era, African-American quarterbacks seemed to flourish.  There was Randall Cunningham, Donovan McNabb and Warren Moon. Unfortunately Jim Crow was lingering around the NFL Draft and nobody wanted another “Colored” quarterback.  Warren packed his bags and headed for Canada.  While there he won so many Grey Cups (the equivalent of the Super Bowl) he couldn’t bring them back to the US as carry-on luggage.  Once firmly planted on US soil and playing in the NFL he left people scratching their heads with the question, “Where the hell has he been?”

There has been a pretty good size list of “Brothers” to play QB in the NFL, but the most recent are Cam Newton, Russell Wilson, Jameis Winston, Tyrod Taylor and Dak Prescott.

By the way, Doug Williams and Russell Wilson are sporting Super Bowl rings.

This article originally appeared in The Afro.