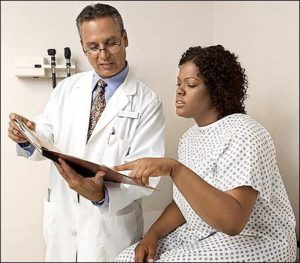 An estimated 1.2 million people in the U.S. were living with HIV at the end of 2013, according to the U.S. Centers For Disease Control and Prevention. Although African Americans make up only 13 percent of the U.S. population, in 2015 they had 45 percent of all new HIV diagnoses.

The frightening fact about HIV is that about 13 percent, or 1 in 8, do not even know they are infected with HIV because they do not know what to look for in HIV symptoms.
5 symptoms of HIV:

#1 – Fever: a low-grade fever, which includes a temperature between 99.8 and 100.8 degrees Fahrenheit, can be a sign of HIV. It can also include sweating at night to the point where it wakes you up.

#2 – Swollen glands: this is another sign of HIV. As it spreads throughout the body, it can enlarge the lymph nodes in the neck, back of the head, armpits, and groin. Swollen glands is one of the first signs of HIV.
#3 – Changes in menstrual cycle: women’s menstrual cycles generally don’t change, but if they do, it can indicate HIV. Other indications include yeast infections, sexually transmitted infections (STIs), and pelvic inflammatory diseases (PID).

#4 – Joint pain: joint pain, muscle pain and fatigue can often be ignored but should not because they can be signs of HIV.
#5 – Unexplained rapid weight loss: rapid weight loss that has no explanation is another symptom of HIV. It can also include decreased appetite and diarrhea.

If you or someone you know is experiencing any or all of these symptoms, see a doctor immediately. HIV is a treatable medical condition and most people treated remain fit and well and able to live normal lives if treated early.