By Adam Schupak  – AUGUSTA, Ga. – Forty-five years after Lee Elder became the first Black man to play in the Masters, he finally is being recognized by the club for his trailblazing achievement.

Fred Ridley, Chairman of Augusta National Golf Club, announced that the club will be establishing scholarships in Elder’s name at nearby Paine College, a Historically Black College, and also invited him to be an honorary starter for the 2021 Masters. 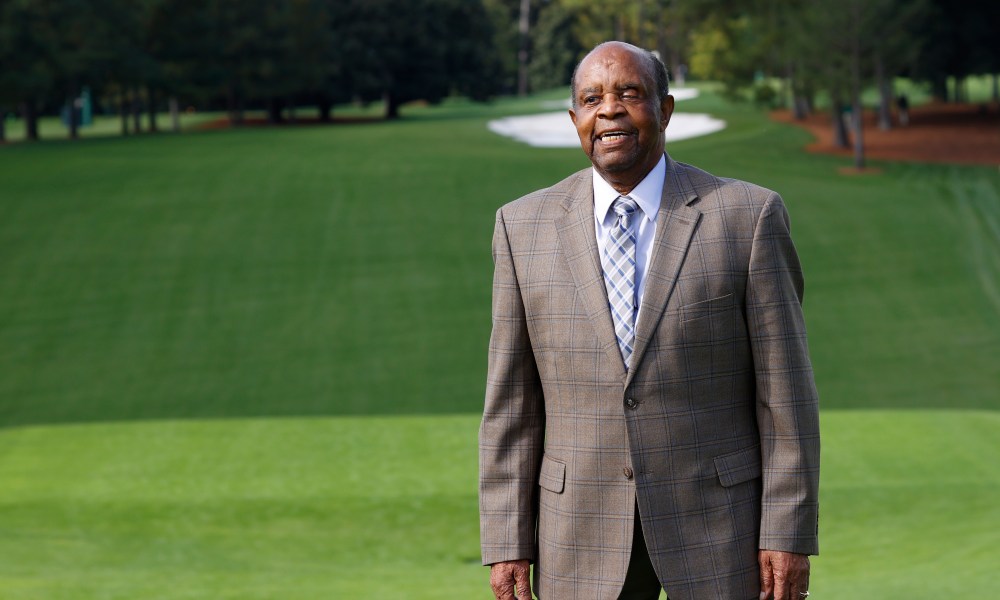 “At age 40, playing in the 39th Masters, Lee delivered a simple but strong message that resonated throughout the world. That message was unequivocal: ‘I belong,’” Ridley said. “The courage and commitment of Lee Elder and other trailblazers like him inspired men and women of color to pursue their rightful opportunity to compete and follow their dreams. But in reality, that opportunity is still elusive for many. We have a long way to go, and we can and we must do more.”

Elder recounted that he received a phone call from Ridley about 10 days ago, shortly after having breakfast and shed a few tears when he hung up the phone.

“It was such wonderful news,” he said. “It’s something I’ll cherish for a lifetime.”

Elder, 86, was one of 10 children, rising from the caddie ranks to dominate the United Golf Association, the tour for Blacks in the era of the PGA’s Caucasian-only rule, to earning his card in 1967 and winning four times on the PGA Tour and qualifying for the 1979 U.S. Ryder Cup team. He was awarded the 2019 Bobby Jones Award, the USGA’s highest honor, which recognizes an individual who demonstrates the spirit, character and respect for the game exhibited by Jones.

Elder broke the color line at the Masters in 1975 after winning the 1974 Monsanto Open in Pensacola, Florida. Prior to that, he was forced to change clothes in the parking lot because members wouldn’t allow him into the clubhouse and played a tournament in Memphis with a police escort after receiving death threats. Early in the week at the 1975 Masters, he was denied service at an Augusta restaurant. When Dr. Julian Scott, president of Paine College, learned of this slight, he called Elder and said the school’s chef would be at his disposal and invited him to eat his meals on campus. Thus began Elder’s long association with the school.

He recalled the first time he drove down Magnolia Lane – in a limousine, no less – more fondly.

“The shaking just starts when you turn off of Washington and get to the gate,” he said with a smile.

It is a fitting gesture for Augusta National, which was slow to welcome people of color and women to its membership, to honor Elder’s pioneering spirit, and it comes at a time when heightened racial unrest in this country suggests not much has changed since Elder made his first of six appearances here between 1975 and 1981, with a tie for 17th in 1979 his best finish.

“There’s been a lot said about racial justice and opportunity, and our question was not so much what can we say, but what can we do,” Ridley said.

The club’s announcement continues a recent trend for Augusta National to emphasize inclusion and growing the game – from the Drive, Chip and Putt and Augusta National Women’s Amateur to the Latin American Amateur and Asia-Pacific Amateur Championship. The latest scholarship effort offers an opportunity for both young men and women to compete competitively at Paine College. (The school has had a men’s team since 2005 but the women’s team will be created from scratch. Details still need to be ironed out for the scholarships, a school official said, but Augusta National committed to fund 100 percent of the cost.)

“When we come up with an idea that we think has merit and we execute on it, we always ask ourselves, why didn’t we do it earlier and I think it’s a fair question and I think it’s good to ask that question,” Ridley said.

As for Elder joining Jack Nicklaus and Gary Player as the honorary starters at the 85th Masters in April, Ridley said he is hopeful that patrons will be able to attend the occasion. It also should give Elder proper time to prep for his big day. He slipped off the sidewalk at a golf club in San Diego, where he lives, and bruised his right knee two weeks ago and used a cane and a helping hand to get around Augusta National.

For more on the original article visit: https://golfweek.usatoday.com/2020/11/09/2020-masters-lee-elder-augusta-national-recognition/