Few people in America would not instantly recognize the name Aunt Jemima. The brand has been around for 125 years, has been a welcomed face at the breakfast table in the homes of millions of Americans, and her products generate more than $300 million a year in revenue. But Aunt Jemima is not a Black-owned brand!

Is she even a real person?

Yes, she is actually a real person – well, actually persons. Many models have appeared as Aunt Jemima on boxes of pancake mix and syrup throughout the years – including Nancy Green (the first company spokesman), Anna Robinson, Edith Wilson, Rosie Lee Moore Hall and Aylene Lewis. Because of their faces, Aunt Jemima has become a global icon! 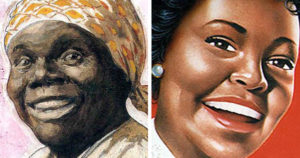 Where did the concept come from?

Created by Chris Rutt and Charles Underwood (two white entrepreneurs), the name actually came from a vaudeville song by the same name whose performer wore the recognizable apron and bandanna headband that eventually became part of the company logo for ready-mixed pancake flour.
In the late 1800’s and early 1900’s, millions of white families had Black servants in their house. And so, the concept of putting a Black face on a food product was thought of to be a genius concept. Although a real Aunt Jemima never existed, the marketing move was so successful that consumers believed she was the actual cook behind the recipe.

Mammy from Gone With The Wind?

The original image on Aunt Jemima products resembled Mammy from the epic 1936 Oscar-winning movie Gone With The Wind. However, the image has evolved to a more modern version of a thinner, Black woman without the bandana/ kerchief.

Today, her warm smile continues to be a welcoming sight at the tables of millions of children and adults across the U.S.

Who owns the Aunt Jemima brand?

Well, as mentioned earlier, the Aunt Jemima is not Black-owned, and actually never was! Currently, Aunt Jemima Manufacturing Company is owned by the Quaker Oats Company, which is based in Chicago, IL. They bought the brand in 1926 and have owned it ever since.
For more details about the story visit www.AuntJemima.com