Breaking news
By Kirby Wilson –  TALLAHASSEE — Andrew Gillum, the 2018 Democratic nominee for Florida governor, has an explanation for the night that derailed his political career.
The former Democratic nominee for governor talked for the first time about what happened in a South Beach hotel room earlier this year.
RELATED: Andrew Gillum entering rehab to treat alcohol abuse after hotel incident

So what was Gillum, the rising political star and father of three, doing in that room? The talk show host Tamron Hall asked him in an interview for the upcoming season premiere of her show. 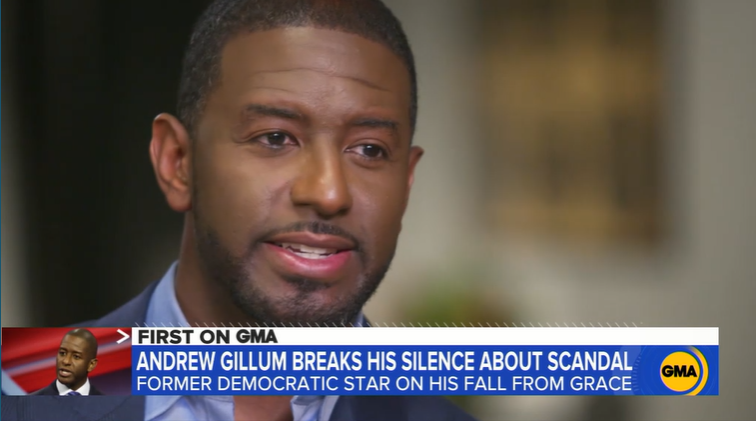 would say the reason why I went to that room is probably no different than how anybody might communicate with someone that they are in a friendship, relationship, whatever, with,” Gillum said, according to an excerpt that aired Thursday on Good Morning America. “I understand very well what people assume about that.”

Soon after that night, a photo surfaced online depicting what appeared to be an unconscious, naked Gillum. Photos of the scene that appeared online were not verified at the time by law enforcement officials, according to the Tallahassee Democrat.

“When that photo came out, I didn’t recognize the person on the floor,” Gillum told Hall. “That was not anything more than a person being at their most vulnerable state, unconscious, having given no consent, and someone decided to use a moment where I was literally lying in my own vomit.”

After the highly publicized incident, Gillum entered a rehabilitation facility to be treated for alcohol abuse.

As recently as earlier this year, Gillum was arguably the face of the Florida Democratic Party. In 2018, he scored an upset victory to become the first Black candidate to be nominated for governor from a major political party. Later that fall, Gillum came within half a percentage point of defeating his Republican opponent, Ron DeSantis.

After the race, Gillum enjoyed a platform as a national political figure. He became a political commentator for CNN. He promised to help mobilize a million Florida voters for the 2020 elections. No office seemed too big for his ambition: the governor’s mansion in 2022; a run against U.S. Sen. Marco Rubio in 2022; even the 2024 presidency.

But even before the March night in the South Beach hotel room, cracks had begun to form in Gillum’s political facade. In November 2019, his political committee, Forward Florida — which was supposed to be registering and reactivating Florida voters — started paying out hundreds of thousands of dollars in legal fees relating to a federal investigation that involved Gillum and his political network.

The target of that sprawling investigation by the U.S. Attorney’s office is unclear. However, the expenses have continued to mount. Last month alone, Forward Florida spent another $253,000 on legal counsel, records show.

Whether Gillum will attempt another run for office someday is also unclear. The interview with Hall will air in full on Monday. Also set to be interviewed: R. Jai Gillum, Andrew’s wife.

“I’m still here by the grace of God,” the former Democratic nominee said. “So much of my own recovery has been about trying to get over shame.”

Editor’s note: An earlier version of this story incorrectly described the publisher of a photo that showed an unconscious, naked Gillum.
For more on the original article visit: https://www.tampabay.com/florida-politics/buzz/2020/09/10/andrew-gillum-on-that-night-in-miami-beach-i-understand-very-well-what-people-assume/?itm_source=parsely-api