Woody Strode was among the first four African-Americans to play in the NFL, but that isn’t necessarily his top claim to fame.

The muscular native Californian became more of a national star on the silver screen than he was on the gridiron. 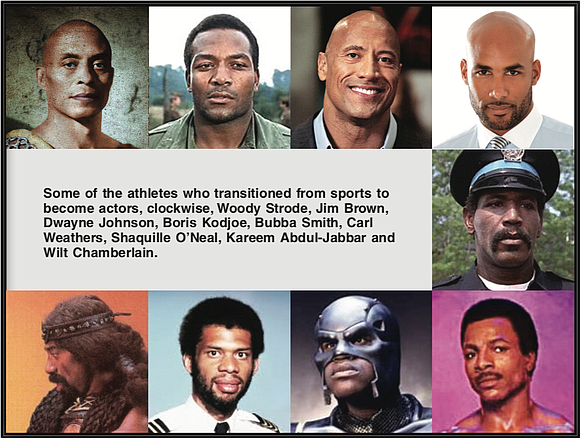 While he helped break the NFL’s color line in 1946 with the Los Angeles Rams, Strode is better remembered for his role as Draba, the Ethiopian gladiator, in the 1960 action-packed historical drama “Spartacus.”

Strode won the Golden Globe for Best Supporting Actor for his role in the film and went on to appear in dozens of movies. His final role was as Charlie Moonlight in “The Quick and the Dead” in 1995, which was released one year after his death in 1994.

The chiseled 6-foot-3, 205-pound Strode was essentially Jim Brown and Dwayne “The Rock” Johnson long before Brown and Johnson had their names posted on a theater marquee.

On a side note, Strode was among the first actors to shave his head. That’s routine now but most unusual in 1951 when he went bald — by choice — for his role in “The Lion Hunter.”

Before suiting up for the Los Angeles Rams, along with African-American teammate Kenny Washington in 1946, Strode starred at UCLA and with the minor league Hollywood Bears.

Also in 1946, African-American players Marion Motley and Bill Willis took the field for the Cleveland Browns.

Among what is now an impressive list of black athletes turned actors, Strode may have been first on the Hollywood set.

Here’s a sampling of other athletes that followed on the big screen:

Jim Brown: The former player for the Cleveland Browns went from being the NFL’s top running back to becoming Robert Jefferson in “The Dirty Dozen” in 1966. In “100 Rifles” in 1969, Brown appeared with Raquel Welch in one of cinema’s first interracial romantic scenes.

Dwayne Johnson: Before becoming a leading man under the screen name “The Rock,” Johnson was a defensive tackle at the University of Miami and a pro wrestler.

Mike Tyson: He made heads hurt as the world heavyweight boxing champ. The pugilist dealt with another kind of sore noggin in the 2009 comedy “Hangover.”

Bubba Smith: After dominating opponents as a hulking Baltimore Colts lineman, Smith turned into Moses Hightower in the “Police Academy” film series in the 1980s.

Carl Weathers: You may know him best as Apollo Creed in the “Rocky” film series, but before that, Weathers was a linebacker at San Diego State University and in the NFL with the Oakland Raiders.

Shaquille O’Neal: The 7-foot-2 NBA legend played the role of John Henry Irons, a comic book superhero, in the 1997 film “Steel.” He also has played himself in several films, includ- ing “What Men Want” in 2019.

O.J. Simpson: The speedster ran for many touchdowns at the University of Southern California and with the NFL’s Buffalo Bills and San Francisco 49ers. About that same time, “The Juice” raced into movie star fame with 1974 roles in “The Klansman” and “Towering Inferno.” He also appeared in the TV miniseries “Roots.”

Timothy Brown: One of the Philadelphia Eagles’ all-time greats transformed into Cpl. Judson in the 1970 film MASH, and later in the MASH TV series.

Terry Crews: Following four years of playing defensive end in the NFL, Crews’ breakout cinema role was Damon in “Friday After Next” in 2002.

Jim Thorpe: This Native American won Olympic gold medals in 1912 in the pentathlon and decathlon. Later he appeared in some 70 movies, usually as a Native American in Westerns.

Uzo Aduba: This actress was a star sprinter at Boston College, nearly setting the school record in the 55-meter dash before becoming Crazy Eyes Warren in the Netflix original series “Orange Is the New Black.”

Forest Whitaker: Many know him from “Bird,” “The Crying Game” and winning an Academy Award for “The Last King of Scotland,” but before that, Whitaker earned a football scholarship to California State-Pomona.

Any way you look at it, he was a tough act to follow.