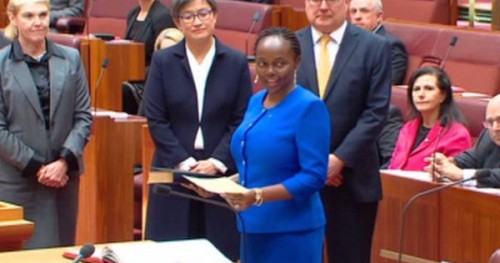 Canberra, Australia — Senator Lucy Gichuhi, a Kenyan-born lawyer, was warmly welcomed by colleagues when she recently became the first-ever person of black African descent in the Australian parliament. The seat she took had been left vacant for more than six months.

She told reporters, “I am honored and humbled to be sworn in… I thank God, my husband and daughters, my father and all other friends, family and supporters for your encouragement, and sharing the vision we hold to unite Australia as one.”But her victory did not come without challenges. Her opposers unsuccessfully tried to challenge her eligibility because of her being born in Kenya. However, Gichuhi arrived in Australia with her husband and children back in 1999, and she legally became an Australian citizen in 2001.

Regarding her political strategies, she told the Senate that she would not be merging with any parties, and would sit as an independent.

As can be imagined, many people made negative and racist remarks after hearing about her victory. But there was also some positivity. One Australian commented on social media, “Hopefully Lucy will bring a fresh perspective to our parliament. Goodness knows – there isn’t much else!”

Another commented, “I don’t care what color you are. If you want to live here and be a part of my country and it’s freedoms, I am proud to have you aboard.”

Gichuhi, the eldest of ten children, grew up in the small village of Hiriga in Nyeri County in rural Kenya. After attending school everyday as a child, she worked to gather food from the garden or help milk the family’s cows. She went on to become a lawyer and now Senator.

Watch the video below: